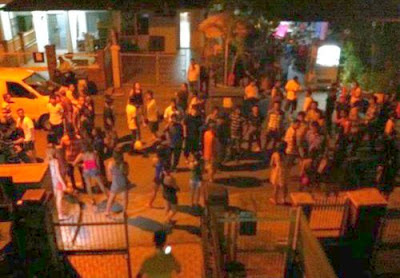 This is definitely not your normal instance of NIMB (Not In My Backyard). The resident of the house with a view wrote an open letter to the prime minister, telling him of residential units being converted into brothels. He should know, his immediate neighbour has joined in the roaring trade at Jalan Suka.

Surprisingly, a group advocating for sex workers’ rights is telling him to lay off. Apparently his complaint has resulted in more frequent vice raids. The reasons offered?

1. It forces more ladies into the trade. If the police catch 10 ladies today, the next day the pimps will bring in another 15. If they catch 15 ladies, the next day you’ll see 20 new faces. In other words, the pimps are recalibrating the supply curve by factoring in the new attrition rate. Like ICA bringing in the migrants to make up for those who voted with their feet.

2. It causes a loss of income for the people in it. Constant raids mean loss of income, pity the poor pimps. For the migrant sex workers, this may mean loss of precious time to earn money to pay back agent fees and feed their families. It also means the poor ladies will have to find more arduous work than lying on their backs. Such as honest work assembling iPads at "Foxconn City" in China.

3. It has caused people to move to other areas. Apparently some of the pimps of Thai girls in Geylang have decided to bring their workers to Changi Village — an area designated for Singaporean streetwalkers. This has to be bad, Singaporeans hate it most when competition is from foreigners. Xenophobia rears its ugly head again.

Seriously? Since when do we need to molly cuddle night crawlers who charge for cuddles? Perhaps we should have a GST waiver for the pimps, since they are doing such a humane job offering productive employment for the ladies. The government has already done their part, providing designated red-light areas (DRA) for the flesh trade. Maybe the tourism authority should advertise the pleasure zones openly in their glossy brochures. If they had been better informed, the CNB and SCDF head honchos would not have had to resort to seeking gratification at public carparks, which are illegal for encounters of the intimate kind. Go get a room.

What we learn here is that Jalan Suka is situated near the gazetted red light district of Geylang. It is not in an officially sanctioned DRA, yet. Meaning, the boundaries of the DRA are expanding stealthily, following the example of the encroaching tentacles of the GRC. Your estate could be next.

In his national day message last night, the prime minister had asked: "What future do you seek for Singapore?" For starters, how about taking the SIN out of Singapore? As in shutting down the casinos since they have long recovered their capital investment. Oh, we forgot, that requires moral fortitude, a rare commodity with present day leaders.