Seventy cents is really too much to pay for a trash tabloid like The New Paper (TNP), but it carries the only recorded quotes from someone hounded out of the cowboy town. Joining in a virtual gang bang reminiscent of the thrashing rained on Rodney King in Los Angeles, the shocking list includes Tan Chuan-Jin (1.30 pm), Tharman (4.30 pm), Shanmugam (5.30 pm) and Lee Hsien Loong (6.30 pm).  Even Pol Pot was offered a chance to tell his story to an international tribunal before he died, Slobodan Milošević actually had his day before the International Criminal Tribunal. So why was this woman condemned so swiftly without being heard? The excepts are from the TNP telephone interview:

It was a bad hair day. For past weeks the noise pollution at a typical Singapore congested neighborhood had worn her down,


"It never stopped. There were funerals, karaoke sessions, and weddings.  Not to mention the fact that my neighbors' flats were undergoing renovation. There were loud drilling sounds as early as eight in the morning."


On Saturday, the decibel level was raised,


"I wasn't sure exactly what it was, but I saw a lot of Malay people dressed-up, and they were heading to a void deck where banners had been set up.
I knew it was some sort of celebration, so I assumed it was a wedding."


It was a Malay wedding, with a slight difference.  Instead of the traditional soothing rhythms of the "kompang", modern equipment was there to amplify her pain,


"I was really cranky that day because all week long, I had been looking forward to the weekend to get some rest. There was someone screaming into a microphone and I tried closing all my windows and doors, but it was still very noisy."


It was not her first. She claimed that she had previously made a Facebook posting questioning whether there were more appropriate places apart from void decks to hold events like weddings, funerals and karaoke sessions.


"I've always been very blunt and vocal, but what I said had nothing to do with race. It was about the situation.  At that time, I didn't think carefully about what I was saying because I was venting my frustration."


Nobody paid attention to her previous rant. This time was different. Within hours, a reported 12,000 converged on  the NTUC Membership Facebook page. It goes to prove, membership has its privileges.


"I was just shocked.  I totally didn't expect something like this to happen and when I saw the petition to get me fired, I was astonished at how far people would go to get back at somebody."


How far the nice folks went to get back at somebody.


"When they were abusing me, that's fine.  But when they started posting pictures of my family members and verbally abusing them too.  I felt it was really uncalled for."


There are two sides to a coin. Noor Mohamed Marican, legal adviser and council member of the Inter-Religious Organisation Singapore could empathise with her plight, "It happened when she was frustrated and emotional.  Although we cannot take her action lightly, we also cannot over-punish her."

Her fan club (see below) got their pound of flesh, and Amy got out before they confiscated her passport. As in the Tale of Two Cities, she can now say, "It is a far, far better thing that I do, than I have ever done; it is a far, far better rest that I go to than I have ever known." Perth is very nice this time of the year, especially when the wild flowers are out at King's Park.

Also from Charles Dickens,
"Repression is the only lasting philosophy. The dark deference of fear and slavery, my friend," observed the Marquis, "will keep the dogs obedient to the whip, as long as this roof," looking up to it, "shuts out the sky." 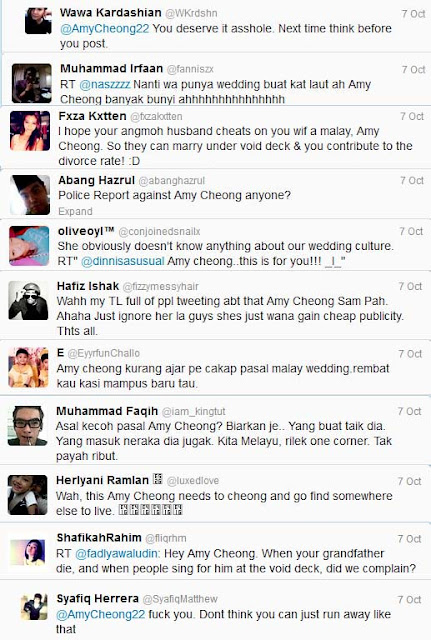