Established in 1854, Chijmes was once the original site of the Convent of the Holy Infant Jesus. Chijmes became a lifestyle destination after a $100-million makeover was completed in 1996. Archbishop Nicholas Chia of the Catholic Church in Singapore took offence with the planned "sacrilegious night of partying” scheduled there for Saturday 7 April, eve of Easter Sunday. Naturally police reports were filed, and letters went out to various ministries with the alphabet soup acronyms like MHA, MCYS and MICA. 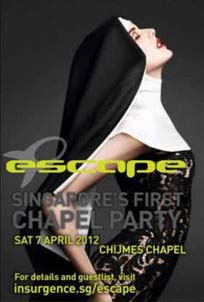 Director of organiser Creative Insurgence, Aaghir Yadav, pleaded in vain, “The overlap with Easter weekend was not intended to be offensive. We have since been in touch with the Archbishop’s office to explain our position and have apologised for offending anyone unintentionally,” he said. According to his AngMoh mindset, there was also nothing offensive with the "nun-inspired Cosplay costumes". Nice try, but no cigar.

Landlord Perenial Retail Management, through counsel, asked the sacrilegious parties involved to cease and desist, threatening legal action to ensure enforcement if necessary. He may not fear God, but lawyers are more scary in Singapore. Yadav capitulated:

"It has come to our attention that Perennial (Singapore) Retail Management Pte Ltd, the landlords for Chijmes has intervened to immediately stop the event planned for Saturday. Therefore, despite our best intentions to move forward - after having apologised for unintentionally offending the Catholic community - and to carry on with an event that aimed to showcase the sounds of one of UK's most popular recording labels and super-clubs, we will have to cancel the event.

We would like to reiterate that we used no religious symbolism in any of our marketing and promotional materials and had no intention to cause any upset. "

The religious symbolism referenced has to be the young women (un)dressed in skimpy nun-like habits, with skirt lengths way shorter than mid-thigh length. Not exactly the outfit worn by Julie Andrews in "Sound of Music", a movie classic also with primary focus on the music, albeit not the kind Creative Insurgence had in mind for the Escape Chapel Party. A safer choice would have been Humpty Dumpty, as in Easter eggs, a thoroughly family oriented wholesome recommendation except for the cholesterol. But that would have been so incompatible with the SIN in today's Singapore.
Posted by Tattler at 10:40 AM