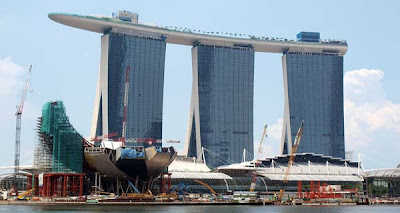 When the organising committee of the 20th Inter-Pacific Bar Association (IPBA) conference was promised the "unmatched guest experience" by Marina Bay Sands (MBS), they got more than they bargained for.

Delegates at the 5-star MBS Hotel spent their first night without air-conditioning. Guests had to use their mobile phones because the room telephones were not working. Some rooms had no hot water or working toilet flushes. At the Sands Expo and Convention Centre, sound quality in the conference rooms was poor, and meetings were interrupted by noise from the ongoing construction works. An IPBA committee meeting had to be convened along a corridor because of loud piped music playing in the meeting room - MBS could not turn off the music because "the sound engineer was not around". And oh, the power went off for more than 30 minutes on Tuesday when the Chief Justice of Australia's New South Wales was speaking.

"The conference has been world class. the venue was presented to us as going to be world class. Sadly, it is not yet world class... I think we should rename Marina Bay Sands to Construction Bay," delegate Axel Reeg from Germany told the assembled lawyers at the AGM. Oh no, Development Minister Mah Bow Tan paid Interbrand $400,000 to rename Marina Bay (to Marina Bay), will the taxpayers' funds be raided again?

Despite promises by Sheldon Adelson, chairman and CEO of MBS parent company Las Vegas Sands that the Integrated Resort (IR) would welcome guests only when it was good and ready, the resort was obviously rushed to open for business in April, with the official opening still scheduled for June.

When lawyers at Chinese restaurant Imperial Treasure were stuck because the only exit lifts were out of order, and the only alternative route was to walk through the casino, they were asked to pay the $100 entry levy. Well, the IR was certainly up and ready for the real business intent of the complex, the gambling part. The MICE (Meetings, International Conference, Events) aspect was just a cover, just as Universal Studios is the cover for the Resort World Sentosa, the other den of vice rushed through parliament by Prime Minister Lee Hsien Loong.
Posted by Tattler at 10:07 AM