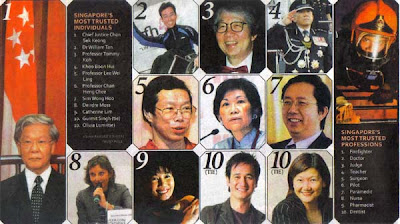 You have to be weary about the Asian Reader's Digest list of the most trusted people in Singapore when it includes a paraplegic neuroscientist and Paralympian fund raiser who was sued for the repayment of S$400,000 in alleged loans. Dr Willliam Tan's accuser said the monies were meant to be loans to help with his living expenses, overseas education in Australia and in relation to the firms he helped run such as the Wilcare School of Health Sciences.

Topping the list, Chief Justice Chan Sek Keong is best remembered, as an Attorney General, for ruling that it's illegal to be loitering around 200 m of a forbidden peripheral zone but perfectly legitimate to be found inside the balloting area, leaving many wondering how Goh Chok Tong et al transported themselves across no-man's land. As Chief Justice, he makes more sense, ruling in favor of a young man charged for drinking a can of beer in his father's stationary car at a HDB parking lot. The engine was not even running. The arresting Singapore police officer had said he was caught imbibing alcohol while in possession of a vehicle.

Dr Lee Wei Ling is daughter of Minister Mentor Lee Kuan Yew. Dr Shovon writes this of her: "My then deputy in Singapore, Dr Lee Wei Ling, accused me of unethical conduct in relation to this project. Dr Lee is an influential person, the sister of the Singaporean Prime Minister, and daughter of the (then) Senior Minister. She took over the Directorship of the National Neuroscience Institute on my leaving." Inspite of the protestions of the Singapore Medical Council, who fired Dr Shorvon, the UK General Medical Council dismissed the allegation of unethical conduct comprehensively and completely, and their actions were confirmed by a Judicial Review.

And media artiste Gurmit Singh, number 10 on the list, does not wear even a turban.
Posted by Tattler at 8:29 PM