The Take Down Of Temasek

Sinestro (Mark Strong) told Hal Jordan (Ryan Reynolds) in Martin Campbell 's Green Lantern, "The Corp is only as strong as its weakest link." The Sunday Times reported that a man who has been linked to the Temasek Review sociopolitical website was arrested last month for offences under the Parliamentary Elections Act. Dr Ong's alleged transgression was conducting an exit poll during the general election on May 7.

Little is known about the regulation about an exit poll. More people are familiar with the Cooling Off Day ruling that was breached by the Kate Spade MP from Marine Parade GRC and her mysterious administrator friend. Latter was supposedly given a police warning but, unlike the accused doctor, her picture was never published in the mainstream media.

Australian company UMR Research also conducted a pre-election poll between May 3 and May 5. The survey findings were published by news wire agencies such as Associated Press, Reuters and Deutsche Presse-Agentur before the polling stations in Singapore closed at 8pm on May 7. UMR spokesperson David Utting claimed that it did not run afoul of the Singapore laws, "UMR has not 'published or caused to be published' this opinion poll in Singapore...it was released in Germany. AP published it." AP, Reuters and Deutsche Presse-Agentur apparently have not been invited for coffee by the police to help in their investigations.

Professor Ang Peng Hwa, director of the Singapore Internet Research Centre at the Nanyang Technological University, said that the law was "very broad". Political risk consultant Azhar Ghani noted that the issue does not lie in whether the poll was done by an overseas company but on the law which is "silent" on where the publication of survey results could take place: While election advertising regulations specifically mention the Internet, the law on election surveys does not, Mr Azhar noted.

Like the police investigation of Tin Pei Ling, we will probably never get to the bottom of the story. Especially since PM Lee appointed her as a member of the Home Affairs and Law Government Parliamentary Committee (GPC) while the investigations were still in progress. Frankly, most of us don't give a damn - she will serve as a constant reminder of the the tumour in the system. What pricks our curiousity is whether the doctor's troubles have anything to do with the take down of Temasek Review. The scant information available is that the site is located overseas. 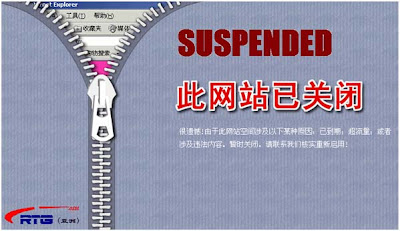