The Minister And The Surgeon

Speaking at the Ministry of Law's Arbitration Dialogue 2012 at the Maxwell Chambers, where a gathering of eminent international arbitrators and arbitration counsels met to discuss developments in Singapore’s arbitration landscape and the recent enhancements made to the Singapore International Arbitration Act (IAA), Law and Foreign Affairs Minister K Shanmugam attributed Singapore's success as an arbitration hub to five main factors, one of which was being swift in responding to changes by amending laws and policies.

Thanks to the amending of laws and policies, Dr Woffles Wu was charged under section 81(3) of the Road Traffic Act. Shanmugam said that at the time of the traffic offences, in 2005 and again in 2006,  section 204 of the Penal Code had not been enacted yet.


Obstructing, preventing, perverting or defeating course of justice
204A.  Whoever intentionally obstructs, prevents, perverts or defeats the course of justice shall be punished with imprisonment for a term which may extend to 7 years, or with fine, or with both.
Explanation.––A mere warning to a witness that he may be prosecuted for perjury if he gives false evidence is insufficient to constitute an offence.


However, the nip-and-tuck doctor could have been easily nabbed under section 182 of the Penal Code, a provision used in cases of false information declared to the police in traffic related violations.


Still, 81(3) of the Road Traffic Act does not exactly get him out of the woods:


Duty to give information
81(3) Any person who wilfully furnishes any false or misleading information under subsection (1) or (2) shall be guilty of an offence.


According to the Law Minister, who was once a Senior Partner and head of Litigation & Dispute Resolution at Allen & Gledhill LLP, the misleading statements in question were made by Mr Kuan, which was why the charge for Woffles could only be that of abetment. That was the report on Sunday Times, 17 June 2012. 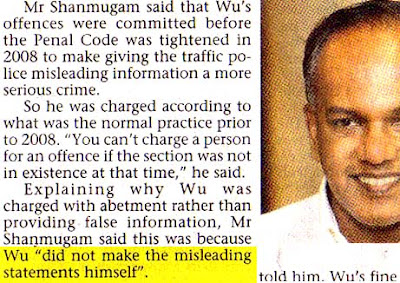 A few days back on Friday, 15 June, the words from the horse's mouth seem to say something else. 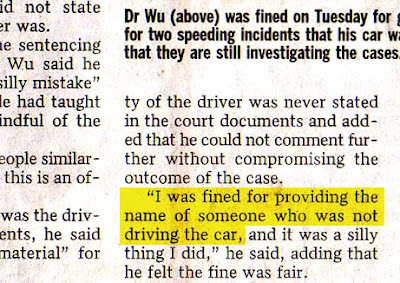 So who should we believe, the rich minister or the rich plastic surgeon? And please, don't quote PM Lee Hsien Loong again:
"Do you believe everything you read in the Straits Times?" (Kent Ridge Ministerial Forum at NUS, April 2007)