A Clash Of Civilisations 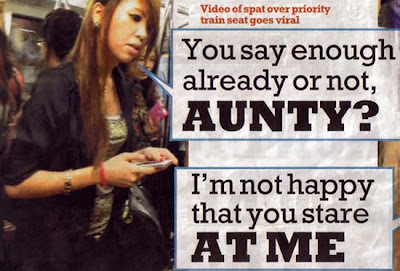 "Most probably you're from China," were the first audible words from the video that went viral.

Muhammad K, 21, who captured the altercation said it started when aunty was eyeing the occupied "reserved" MRT seat. The young lady engrossed with her smartphone soon took notice of the mumbling about inconsiderate people and the dire need to sit down, and promptly got on her feet. Instead of expressing gratitude, the grouchy woman stared daggers, grumbled more, and aimed her camera phone as a final threat. Unfazed, our little miss put her down smartly, "You say enough already or not, aunty?" Maybe it's a case of Gen X versus baby-boomer, but mercifully the cops were not called.

"Go back to China" and "go back to the laundromat where you work," were the racist taunts from Brit Richard Jonathan Mills.

Mills had earlier pointed out to Alexander Chew in the members-only club at Gallery Hotel the dry cleaning tag was still on his coat. Maybe the busybody was trying to cosy up to Chew, who was with distinguished company, specifically Mr Eduardo Saverin, co-founder of Facebook. The insults were rained, according to Chew, when he was exiting the washroom. Mills' version has Chew jumping queue, thus deserving of the vulgarities and racist tirade. Grabbing Chew's shoulders, he admittedly challenged, "I dare you to hit me." Chew obliged, and floored the surprised Ang Moh. What's unsurprising about the outcome is that racist walks away with a potential sedition charge, while Singaporean gets fined.

Note that in both instances no China nationals were involved. Why then the quick negative references about mainland Chinese? The curry wars are over, Sun Xu has made amends, even the wife of the Ferrari driver apologised. The fall of Chongqing police boss Wang Lijun and party leader Bo Xilai is ample proof their government is serious about civilised behavior. Which says a lot about our own Chief of Protocol Lim Cheng Hoe being nabbed over improper claims for expenses incurred during overseas trips. How much more do these greedy buggers expect to be paid?