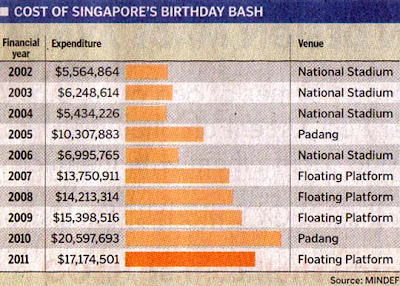 The simple question raised by Non-Constituency Member of Parliament Gerald Giam illustrates why more alternate voices are needed to represent the people's interest. For decades, nobody raised a single query about the large sums expended for a birthday party, money which is much needed for social welfare and healthcare requirements, among others.

Amidst the doldrums of worldwide financial meltdown in 2008, $14 million was still splurged (record high in that year), not a single cent was trimmed to entertain the VVIPs who were hosted to exclusive cocktail parties while the common folk make their way home in the over crowded trains and buses. Only VIPs are allotted parking privileges.

The most expensive undertaking was the extravaganza in 2010, costing a mind blowing $20.6 million. Defence Minister Ng Eng Hen said the Padang had to be hardened for a heavier load, large LED screens, and supporting towers. Without a detailed accounting, we are unable to tell if the procurement for top dollar items were approved along NParks procedures and similar standard operating guidelines.  Of course these numbers pale in comparison with the budget allocated for military toys.

Aljunied GRC's Pritam Singh also attempted a goal kick by asking what role the online media played in the Ministry of National Develpopment (MND) decision to report the matter of the folding bikes to the Corrupt Practices Investigation Bureau (CPIB). But Minister Khaw Boon Wan deftly deflected the shot, denying credit to the netizens' detective work, by stating, "What was material to our decision... were some disclosures by certain parties  interviewed by the Audit Team."  He pointedly did not elaborate  on what the source of the disclosures were. Go on, ignore the online media, if that's the way the Minister wants national conversations to be carried out. Even before the advent of the internet, the kopi-tiams have always known where to look for the real stories.