Baey Yam Keng (born in the year of the dog) got a lot of flak after telling Singaporeans to reflect upon themselves following foreign talent crap Sun Xu's odious observation that our senior citizens are dogs ('We need to reflect upon ourselves, are we the way they described?").

Now Senior Minister of State for Education, and Information, Communications and the Arts Lawrence Wong is using the same "r" word: "we should really pause  and reflect, and ask ourselves whether this is the kind of society we want." He was weighing in on the public relations disasters of (1) the Prince William wayang, and (2) the con in the national conversations.

Feigning "some heaviness in my heart", Wong expressed dismay that the politically staged events were politicised. That sentence doesn't even make sense. Next, Wong will be telling us he's not in politics to practise politics. Politics (from Greek politikos "of, for, or relating to citizens") as a term is generally applied to the art or science of running governmental or state affairs, and modern political discourse focuses on democracy and the relationship between people and politics. If Wong plans to take the people out of politics, dream on. If there's a suppurating political divide in society, surely the blame should be on those running the government, not the people they are trying to govern. As the popular saying goes, if you can't stand the heat, get the fish out of the kitchen!

Unlike Baey, Deputy Managing Director of Hill & Knowlton, Wong the minister may excused for  having a tenuous grasp of public relations. For that matter, he's also probably ill prepared for Education, and Information, Communications and the Arts. Hey, he's simply there because of the GRC. And as for Baey, he should really deserve a royal reprisal for insinuating that Kate's choice of fashion wear in Singapore was attributed to the wayang motive. Reflect on that. 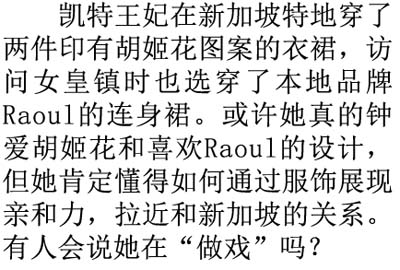