If You Can't Trust Your Doctor...

It's always wise to seek a second opinion when it comes to medical advice. A friend saved quite a few dollars when he ignored his doctor's recommendation to go for a MRI after being examined for a pain in his arm. It turned out to be a minor sprain that began to heal itself naturally after a few days.

Ms Tan was determined to go one step further. She googled the physician who was supposed to attend to her relative, and discovered that the fellow was actually struck off the medical register in Florida, USA. And that was not all, he is currently the department head of radiation oncology at the National University Cancer Institute of Singapore (NCIS).

Prof Lu was a registered medical practitioner in four American states when he was caught in 1999 selling erectile  dysfunctional drugs on the internet, in gross violation of acceptable medical procedures. He claimed the summons was sent to a wrong postal address, resulting in his non-appearance at a Florida hearing and the revocation of his licence. We're talking about a country who could successfully track down Osama bin Laden and snuff him out, but not able to trace the whereabouts of a Chinese doctor from the PRC? Somehow the other 3 states did manage to trace his geographical whereabouts and fined him US$10,000 (New York and Pennsylvania) and US$2,000 (Indiana).

By which time he had already headed for Singapore in 2001, where his compensation package as a cancer radiologist was substantial enough not to require a side income from an illegal online business. He still holds a licence to practise in his home state in New York.

Prof John Wong, head of NCIS, insists that Lu "has done nothing in the past 11 years to make us doubt his competence, professionalism and integrity." Wong was forgetting that when the Singapore Medical Council (SMC) in 2009 required all practitioners to declare any past or present instance of being investigated by the authorities, Lu had conveniently skipped a response to that particular query while applying to renew his licence in April 2010. This was way before the Woffles Wu stratagem of roping in an oldish fall guy became public knowledge. Wong claims Lu subsequently apologised to the SMC after being guided/advised/instructed to do so, and the American import was allowed to practise in Singapore inspite of the brazen attempt at deceit.  As recent as March 2011, Florida Board of Medicine records his decision to withdraw his application for licensure, implying there was more than a postman problem behind his original transgression.

Chief executive of National University Hospital (NUH) Joe Sim, also threw his weight in support of Lu, saying it was "a dumb mistake", whilst declaring in the same breath, it was not something NUH condones. Both Wong and Sim are telling us that Lu has been punished, without spelling out the type of punishment meted out to the surreptitiously errant doctor. Maybe they took away his Herman Miller chair entitlement.

Heck, if Ms Tan had not been industrious in her research, the cover up by Lu, Wong and Sim would never have been brought to light. Since SMC told the press it is looking into the case,  we have yet to find out if it too will join in the sorry stonewalling saga. For all we know, Health Minister Gan Kim Yong, who was copied in the whistle blower email, might even go to bat for the doctor. A precedent has been set. 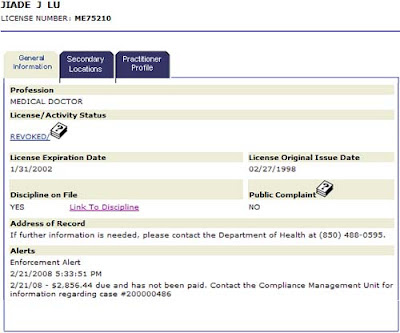