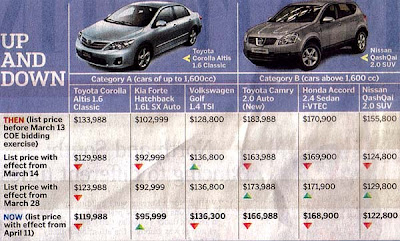 In retrospect, it was so easy to bring car prices down.

All the Minister had to do was change the rules for car financing and make some adjustment in taxes in February, and the Certificate of Entitlement (COE) for cars above 1,600cc plummeted from $92,667 to $58,090.

Then, even the resale market was hurt, and the Minister decided to relax the pruning measures to give the dealers some breathing space. Whoever made the representation for their case must be well connected in the grassroots organisations.

Back in December 2012, small car COEs shot up as high as $82,000. Open COEs hovered at the astronomical heights of $95,000. Some said that’s enough to buy a small island in Greece -  or even Greece itself, given the precarious financial standing of the beleaguered country at that time.

Of course we know how the motor madness was incubated. First, the government announced that the car quota was going to shrink, while it was boosting population import numbers on the quiet. Then there was the red carpet welcome for the big rollers, guys who can afford to buy three or four cars. These are probably the same guys who put 449 Ferraris on the road in Singapore (up from 142 in 2001), while the Maserati fleet has grown from 24 to 469 in the same period. To them the COE must be just the cost of a speeding ticket.

So while the car dealers and the tax collectors were smiling all the way to the bank, the rest of us poor folks were herded to the flakey train and bus services. The more desperate simply jumped into the tracks.

The clue for the turn of events has to lie in this statement: "The expectation is that COE premiums will soften, so no dealer will bid aggressively in case it affects his margin". So spare no pity for those manning the car showrooms. The day of reckoning cometh, Singaporeans have woken up to the conspiracy. Next step, say no to the COV.