Contemporary conceptualizations of the public sphere are based on the ideas expressed in Jürgen Habermas' book "The Structural Transformation of the Public Sphere". Broadly speaking, the public sphere encompasses the processes involved in political communication and the sites where the processes take place (the media, civil organisations, etc). According to democracy theorist Robert Dahl, there is an expectation that the political preferences expressed in a democratic sphere are "freely formed". That is, if we subscribe to the definition of democracy as a political system that allows political talk to take place in a relatively untrammeled way, where civil liberties provide people with the ability to express views that run contrary to the current flavour of the incumbent government.

Yaacob Ibrahim gave a clue why Nizam Ismail had to go when he said money given to Malay Muslim organisations must be used to help the community, not "creating a platform for people to be involved in partisan politics." The Minister obviously does not subscribe to the belief that listening to diverse views, even critical and dissenting ones, is one of the processes of helping the community, one of the vaunted objectives of the ongoing National Conversation.

The chairman of the Association of Muslim Professionals (AMP), Azmoon Ahmad, had advised Nizam to part ways after separate phone calls from two Ministers (guess who?) took issue with some online comments, speaking at the Hong Lim Park, and participation in a public forum. Azmoon had to act, "Otherwise, the Government will withdraw all funding from AMP." Money may not buy happiness, but it sure does ensure compliance.

Nizam was aghast that activities in his private personal capacity was commingled with community services in his public capacity as an AMP/RIMA director. Community services which stand to benefit thousands – be they low-income families, youths at risk, students. Nizam is also leaving Suara Musyawarah, a feedback panel for the Malay-Muslim community. You would too, if feedback is commingled with kickbacks.

The other news worthy item in the public sphere is the arrest of a cartoonist for sedition, the offending copy being “Malay population… Deliberately suppressed by a racist government.” 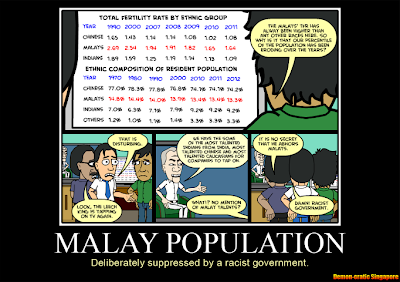