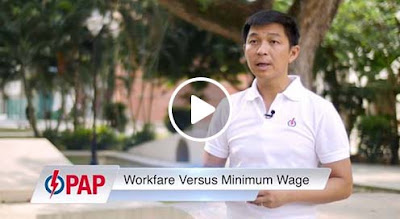 In his attempt to explain why the People’s Action Party (PAP) opted for the Workfare scheme rather than a minimum wage, it is clear why the Social and Family Development Minister Tan Chuan-Jin actually thought collecting cardboard boxes under the heat of the tropical sun is a healthy exercise for our senior citizens. They must be having a blast now that the haze is on, with the 24-hr Pollutant Standards Index (PSI) hovering at the 82-94 range.

The Workfare Income Supplement (WIS) Scheme, like all pseudo help government contrived programmes, makes one jump through many hoops, before you get to see the real cash. Some requirements posted on their website:

So the student who tries to pay his way through school will continue to be exploited by working at a fast food joint for $500. Even if he's desperate enough to collect the WIS handout, he has to first labour for 2 months at slave wages. And if he happens to be staying with his retiree parents in a nice house, he is disincentivized from taking on a part time job to help with the bills. Minimum wage has no such artificial constraints.

So what happens to the employer who refuse to pay the minimum wage? These are the same folks who typically ask their $500 employee whether they want a paycheck with or without CPF deduction to avoid the compulsory contribution. They march to the friendly neighbourhood PAP MP and threaten to close shop and wreck the economy. And dummies like Tan will fall for it hook, line and sinker.

“These companies may not be prepared to pay that wage level. We've seen that happening in other countries,” Tan claimed. Please name those countries at your next rally, first world types preferred.