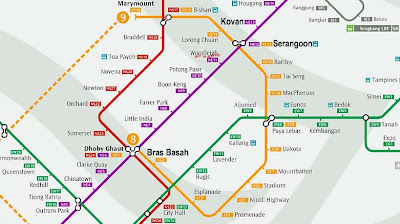 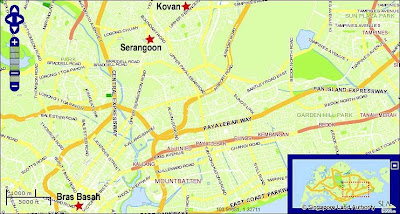 Look at the above maps (click for larger view), by rail and by road, and note the locations of Bras Basah, Serangoon, Kovan stations, the relative distances as the crow flies, and read what Straits Time wrote in defence of the distance-based fares:

"A train trip from Bras Basah station to Serangoon station, for example, is calculated as having a distance of 11.4 km. The journey costs $1.58.
However, a train trip from Bras Basah station to Kovan, which is farther away than Serangoon, costs only $1.46. The distance between Bras Basah and Kovan is calculated at 8.9 km.
Why does a commuter need to pay more to go to Serangoon than Kovan, if the latter is farther away on the North East Line?
This is because the fare for the journey is based on the fastest travel route via the Circle Line.
As both stations are on the Circle Line, commuters do not need to switch between rail lines.
The fastest route in this case happens to be longer, which is why the fare is higher."

The on-line LTA Distance Fare Calculator computes the distance from Bras Basah to Kovan (8.9km) to be shorter than to Serangoon (11.4km). Judging from the maps, this appears to be based on the length of the train tracks, rather than the geographical distance to the destination. The 11.4 km journey on the Circle Line from Bras Basah (CC2) to Serangoon (NE12/CC13) has 11 stops. The shorter journey via the North East Line has 6 stops (Woodleigh is not in service). How can the longer Circle Line route, with more train stops, end up as a faster ride? Are the trains there souped up hot-rods driven by F1 wannabes? The writer also argues disingenuously that the Circle Line route to Serangoon requires no train switch, but conveniently omits mentioning that the journey onward to Kovan, for an apple-to-apple comparison, does have one transfer at Serangoon. LTA got its knickers in a twist by trying to throw a dubious time variable into a straight forward distance-based formula.

In an equitable implementation of a distance-based fare structure, the public should have been given a fare choice to travel from Bras Basah to Serangoon via the cheaper North East Line or the more costly Circle Line. Instead, LTA simply sticks it to the commuter with the Circle Line computation. But then freedom of choice is not exactly an enduring feature of the Singapore scene, or is it?
Posted by Tattler at 8:54 PM