Sleep On The Job No More 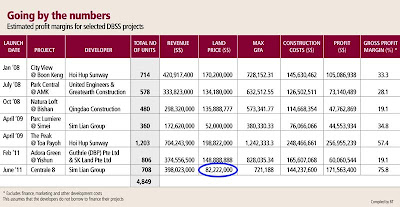 Minister for National Development Khaw Boon Wan rapped Business Times for wrong numbers that quoted a land price of $82,222,000 and a maximum GFA of 721,188 square feet for the  the Sim Lian Centrale 8 project at Tampines. According to MND, the "correct" figures were respectively $178,128,000 and 682,385 square feet. The difference of almost $100 million, was eerily close to the discount offered by the developer after an initial outrage of the $880,000 asking price for some units.

BG (NS) Tan Chuan-Jin was first to highlight the boo-boo when he responded online to a netizen's query on the land price paid by Sim Lian. According to him, Sim Lian’s land price paid was $178-$195m and not $82m as claimed by BT. Since Tan was a former army officer, and not former MND staffer or player in the property market, nobody knows where he plucked the figures from. Maybe he got the prices from fellow PAP comrade Ong Ye Kung who missed his GRC ride into parliament because of the unfortunate affiliation with George Yeo's Waterloo at Aljunied. Mrs Ong Ye Kung, nee Diana Kuik, is reported to be an executive director of Sim Lian, and daughter of the owner. Family business in Singapore seems to be all the rage nowadays.

BT explained on Saturday the error arose  because it had inadvertently used the land price of another Sim Lian project - the Premier - to compute the data for Centrale 8. Both developments are located in Tampines. Which begs the interesting question: why should two developments in the same mature estate have a land price difference of nearly two times?

It's easy to challenge the construction costs - the material, the finishing, the landscaping, the facilities, etc - but when we come to the price of land acquired and sold by the government, we are once again at the mercy of the mysterious Chief Valuer. Mah Bow Tan never did let in on how the mechanism works, and it looks like Khaw Boon Wan is also keeping the secrets close to his recently operated on heart.

In his blog, Khaw commented on the stress of his new job, "I have been in MND for five weeks and not sleeping well." Perhaps if he were more open and transparent with the public, and come clean with the HDB costings, the minister might be able to have a better night's rest. Or he could continue to share the guilt-ridden lot of Macbeth,

Methought I heard a voice cry 'Sleep no more!
Macbeth does murder sleep,' --the innocent sleep,
Sleep that knits up the ravell'd sleave of care,
The death of each day's life, sore labour's bath,
Balm of hurt minds, great nature's second course.
Posted by Tattler at 10:17 PM