The Price Of Silence

Contrary to widespread public skepticism, what you read in the morning papers can actually be true, when the source of their stories originated from the online media. As in the strange tale of the love child thrown out of her only home since the age of 7, her silence supposedly purchased for the price of $1 million.

Ms Chan was not ashamed to admit that "my father and mother were not married when i was born." What riled her was that her "legitimate" siblings "kicked me out of the family... and who are going around town saying that i demanded money from my step mother, when i was kicked out."

When father died in 2009, her step-mother, 78, wanted to sell the $20 million bungalow at Lornie Road. That's lots of money to go around for her, her 4 kids, and Chan, the offspring of her husband's mistress. Apparently Chan was not happy about moving out of the outhouse (what's that? a bungalow within a bungalow?) in the family compound and was given 1 million smackeroos on condition that she won't publish anything about the subject matter on the internet or social media. Mainstream media was probably left out because nobody believes the stuff they print anyway.

Nobody really cares about the goings on within gated grounds of the rich and notorious, private citizens are entitled to their privacy, standing members of parliament included. The public interest lies in how the court will rule on whether the undertaking signed by Chan amounts to a total gag order on speaking about the family affairs or whether it was really about airing dirty laundry. 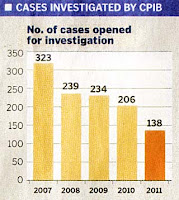 The wide publicity coverage of the recent high profile graft cases unearthed by our hard working CPIB chaps has led many to assume that Singapore's 5th ranking by corruption watchdog Transparency International is at risk. Surprise, surprise, the number of cases totaled only 138  in 2011, compared to 323 in 2007. The only worry is that the downward trend could be the result of paying off the potential whistle blowers. That's corruption upon corruption. Nixon got into a real mess because of the secret slush fund to silence the Watergate bunglers. This is the kind of stuff that can bring down a government. Especially if office holders have lots of skeletons in their cupboards.