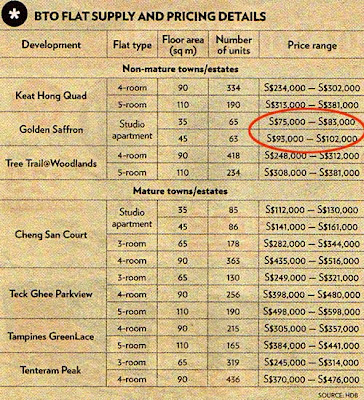 The Housing and Development Board (HDB) has a two-fold problem, built more flats and make them more affordable. First one is easy, and suits the appetite of the GDP growth junkies to a T. More flats for sale mean more money in the state coffers - just think of the contribution from the mysterious "reserves" portion of the pricing policy.

The good news is that $75,000 will now actually buy you a brand new flat (cheaper than those affordable $100K units), if you can contend with 35 sq metres in a non-mature estate. That's HDB nomenclature for an ulu part of the island which may lack certain amenities like schools, supermarkets, clinics, hawker centres, as well as sports and recreational facilities. On the plus side, the relatively remote locations may suit those planning a discreet afternoon tryst with a female IT sales executive. Just imagine, if they deliver on the $60,000 housing grant, a studio flat will cost only $15,000.

Before you rush out to nominate the HDB for a humanitarian award in finally reducing the entry level for basic accommodation, read on. The new flats will not be fitted with sanitary essentials like wash basins and taps. Those are optional items which HDB will happily supply at a mere $4,300. Recall the gold plated tap that caused NKF's TT Durai a lot of bother was priced at $990, including discount and GST.  Sure that was in 2004, and them HDB executives have had their paychecks revised upwards umpteen times since. For those on a tight budget, say earning $1,000 a month, please make do with a plastic pail and stand pipe. It will add a touch of nostalgia, and bring back fond memories of kampong days in the 50's, before ministers award themselves million dollar salaries. At Teck Ghee Parkview, HDB will even offer you a partition to separate the kitchen from the living room, at $2,000 extra.  Do you really need to prepare curry and risk a police report from the PRC neighbour?

Once again, the guys in charge missed out on another golden opportunity to appease the unhappiness of the disgruntled citizens. Then again, if the wealthy foreigners can have their Formula 1 races for another 5 years, Goh Chok Tong's concept of net happiness is attained. Didn't Lim Hng Kiang just remind us that while foreigners currently account for about 20 per cent of all income taxpayers, they contribute more than 25 per cent of Singapore's total personal income taxes?