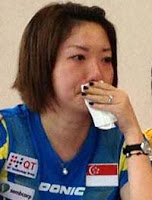 Can you think of someone who can afford to retire at the age of 31? Li Jia Wei can, thanks to the $1.27 million bonanza from the Multi-Million Award Programme provided by her host country.

The official reason given is that a knee injury is ending her sports career that require the use of healthy hands. "I will always be a Singapore player and I want to ...  repay the country for the support I've received," she sobbed convincingly while announcing plans to pack her bags and return to China with her 3-year old son. It sounds more like "quitting" than "retiring". Throughout her 18 years spent here, she didn't even bother to pick up Singlish. And she's probably not planning to see her son killed/injured/mangled in a national service training exercise either.

Another foreign talent who downed her ping pong paddles is Sun Bei Bei, 28, who decided to step down to raise kids. Contribute to advancing the nation's pathetic Total Fertility Rate. "Whether as a coach or as a player, I will not leave Singapore. I want my child to live here and be educated here." That sounds more palatable. Sun is assigned the role of youth coach to the School Within A School programme at the Singapore Sports School. At least she plans to earn her keep.

It beggars the imagination why Lee Bee Wah will want to "arrange for her (Jia Wei) to do something for Singapore" when she is clearly uprooting herself and family to settle in Beijing. Which part of goodbye does she not understand? Something must have been lost in translation.

Surely Singapore money should be spent on Singaporeans.

The headlines scream "Higher cash payout for elderly households," but the "bonus" money is a mere $5,000 (which used to be a CPF top-up). All part and parcel of a Lease Buyback Scheme incentive to sell a $470,000 4-room flat and trade down to a $100,000 studio apartment. Which means the silver haired will bequeath a substantially reduced asset to their kids when the time comes to quit this life on earth. If they could afford to have kids in the first place. Nobody really arranged to do something for the old folks who are trapped in the asset-rich-cash-poor dilemma.