The last time we heard from Hri Kumar was when he blogged about "the fine of $1,000 imposed on Woffles Woo (sic)." Then he went silent like a broken Japanese transistor radio. This time he is up against an accountant well known for his expertise in providing insolvency services to industry circles.

The Malaysian is alleged to have misappropriated  $16.5 million from his client, breaking the record sums of previous cheating cases of rogue lawyer David Rasif ($11 million) and two Singapore land Authority executives ($12 million). Since this involves his day job, Kumar will have to get his facts, and names, right.

After his hiatus since the June posting, his 3 Sep comment indicates he has problems discerning between myth and fact when it comes to the many failings of the Ministry of Education (MOE)'s primary education record. 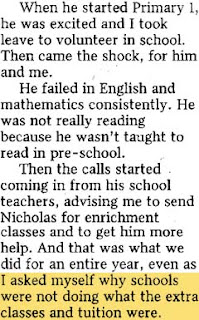 The mother who wrote to the press said nothing new.  A Norwegian lady who was here for her doctorate at NUS some 8 years ago had sent her daughters to a neighbourhood school for their primary education. Her astute observation then, and still valid now, was that the teachers expected her kids to have private tutors cover the balance of the syllabus not taught in the class room. And that's how the rich kids always fare better in grades, they can afford the tutors the poor could not. Parents are even paying big bucks so their tiny tots will stand a better chance of being selected for the Gifted Education Program (GEP). Urban legend has it even undergrads in our local universities engage private tutors. The real kaisu types must be sending their daughters to campus, loaded with Mont Blanc pens, iPods and tailored shirts, so an accommodating professor will provide extra attention after the tutorials.

With pre-school education added to the mix, the number of horror stories can only increase - MOE scholars are now known to include pedophiles. Do you think Education Minister Heng Swee Keat knows what really goes on in his ministry? He used to be Managing Director of the Monetary Authority of Singapore (MAS) from 2005 to 2011, and yet thousands were not warned of the toxic investment products. Parents have blindsided for so long, let's hope the people in charge will open their eyes and get their facts right.