Australian Foreign Minister Julie Bishop must have run out of discussion points with Singapore's Lee Hsien Loong when she moved from the Nuclear Security Summit talk to something called "reverse Colombo Plan." And probably any other topic since it must be ridiculous to have a fireside chat with a country with no nuclear facility to speak of.

Many Singaporeans have benefited from the Colombo scholarship which have allowed more than 40,000 Asians to study in Australia for free during the mid-1950s to 1980s. The late Dr Tay Eng Soon actually studied nuclear science under such scheme, but ended up a lecturer because there was nothing in the field in Singapore for him when he returned from overseas. He was to have a more financially lucrative career as a politician.

Digression aside, the reverse plan is intended for sending Australians to study in Asia. And progress on to internships with companies who will probably hire them after the industrial attachment. In Singapore, latter mechanism usually comes with a bond of some sort. Which means 3 to 4 years with a Singapore based company, and robbing born and bred Singaporeans of another place in the employment market. In the case of a Singaporean male, it also means a 2 year career head start for the foreigners, thanks to the onerous National Service commitment.

We don't know how much of the taxpayers' money go into these scholarships. What we do know is that the four Government-funded universities are raising their tuition fees again. Someone calculated that tuition fees have increased about 7.5 per cent per annum for the past 26 years. With all the brain power on campus, you would have thought someone could come up with a way to reduce operating costs.

Pursuant to Sylvia Lim's question in parliament in 2008, we are told about one-third of our local students who graduated between 2005 and 2007 took up tuition fee loans to finance their undergraduate studies. Most students would have graduated with an average debt of about $20,000. Another opposition party member Png Eng Huat got Education Minister Heng Swee Kiat to admit that the government dishes out more than $210 million in tuition grants for foreign students every year.

Once again, the Government is claiming to enhance the financial assistance schemes for needy students with more subsidies. It is starting to sound like a broken record, each hike being justified by another subsidy. Instead of giving more to Singaporeans to achieve a higher education, they prefer to help the foreigners. That, too, is a familiar refrain. 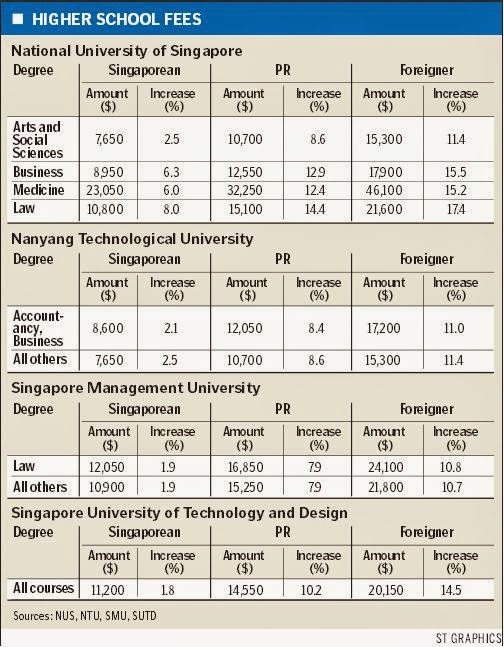