Money To Be Made From Kids 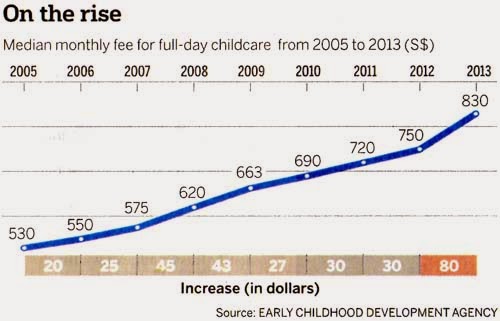 My sister knew something was amiss when she picked up her young one from the daycare centre. Instead of the cheery face that used to greet her, the poor girl was looking downright miserable. And no wonder, she had soiled her pampers, and none of the caregivers were any wiser. The child could have been soiled for hours. Makes you wonder how childcare fees could be justified for being hiked again, this time by at least 10 percent, the highest over the last 8 years.

According to the Early Child Development Agency (ECDA), the median monthly fee was $830 last year, $80 more than in 2012. Childcare centers claim that teachers are more qualified, but are they good at their work? Maybe they should  spend the extra 10 to 20 percent for automatic poo detection equipment, instead of more money for salaries of heartless - and olfactory challenged - caregivers.

Then again, the government has been ramping up the building of more childcare centers. There were 1,083 centres last year, up from from 1,016 in 2012. More centres mean more money to be made from working mothers, mothers who had to join the workforce because a single income can no longer support a family in Singapore. Debunking Chan Chun Sing's "focus on lower-income and middle-income families", parents are crying foul, rightly pointing out that the increase in fees are eating into the "savings" from subsidies. It won't be long before the kids will be housed in tented facilities, since a "seasonal overflow" in demand will mean more collections from the working moms. Like the hospital crunch, there's no reduction in ward charges for being parked in corridor space.

Dr Amy Khor really insulted our intelligence when she attributed the current hospital bed shortage to “seasonal peak” demands, and then added injury to insult by saying “But we need to realise that this could happen again.” One doesn't have to look further for proof that money won't necessarily attract better talent, in teachers, caregivers or administrators. They pay ministers millions, and they still can't see beyond their noses. Singapore’s number of hospital beds per 1,000 people decreased from 2007 to 2012, dropping from 2.5 to 2.2. They probably didn't notice the stench from the liberal influx of foreigners.