Ouch! That is so NOT the kind of epitaph to die for. The Business Insider write up of 19 Mar 2015 is proof that we are not alone in begrudging an installed princeling for helping himself to the nation's cookie jar.

Maybe Putin was putting on a show of personal sacrifice when he took a 10% pay cut in the face of mounting economic sanctions and low oil prices, but Japanese Prime Minister Shinzo Abe was sincere when his pay was shaved 30% to help fund reconstruction in the aftermath of the March 2011 earthquake and tsunami devastation. But unlike the cape crusader wannabe Lim Swee Say who effused endlessly about his CPF statement, Putin told reporters that "Frankly, I don't even know my own salary, they just give it to me, and I put it away in my account." 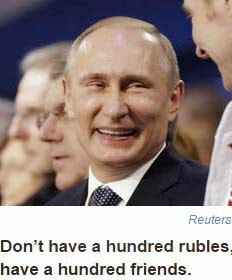 Over the last 15 years under Putin’s reign, Russia has raked in over US$3 trillion “petrodollars.” Although detractors claim that Putin’s brand of crony capitalism has turned many loyalists into billionaires, he did not peg his salary to the top earners.

The rot started in November 1994, when Lee Kuan Yew made a mockery of the Old Guards' sacrifice, "My generation of political leaders have become dinosaurs, an extinct breed of men when went into politics because of the passion of their convictions." One journalist was brave enough to tell him that higher salaries would change, and Lee quoted him, "the name of the game and attract a different type of person with different motivations."

His speech during the debate on the White Paper on ministerial salaries concluded with these lines: "In five to ten years, when it works and Singapore has got a good government, this formula will be accepted as convention wisdom." Now that we have rat infested housing estates, trains breaking down with alarming frequency, rising healthcare cost showing no signs of abating, it is questionable what a working government is really like. Ten years after 1994, we had a new prime minister, whose next ten years' turn at the helm was coined a "roller coaster decade" by Straits Times journalist Chua Mui Hoong, the nadir of which has to be the Population White Paper in 2013.