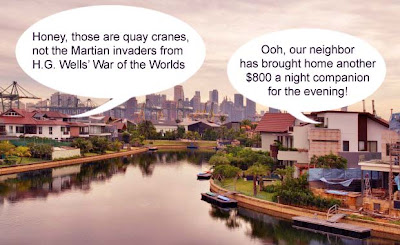 It's the 21st century, yet some people still believe that it's bad luck to receive an empty wallet as a gift because it portends that your wallet will always be empty. Cantonese always frown on giving a timepiece as a gift ( 送钟, "sòng zhōng" in Mandarin,) because the expression is homophone for "attending a funeral".

No such superstitious qualm dissuaded two brothers from buying the Sentosa Cove bungalow in which a China girl drowned under mysterious circumstances in the dead of night, on March 24. Such is the attraction of a good bargain in Singapore. The three-storey waterfront unit on Ocean Drive at Sentosa Cove, advertised at $15.8 million and below the valuation of $17 million, was sold in August 2010 for S$13.6 million. At S$1,690 psf, the 8,049 square foot plot represents a saving of S$6 million, based on the S$2,546 asking price of a similar bungalow transacted in the the following month. We are not told what was the original price paid by the former owner, rumoured son but no relation of business tycoon Chua Thian Poh, the high school dropout who earned his first million by age 21 making hooks and spikes for logging industry.

The new owners plan to use the bungalow as a “holiday home” for family gatherings after their S$1 million renovations are complete. Assuming that does not include cementing over the swimming pool, one can imagine the house guests, suitably charged by alcoholic beverages, staying up all night, laying bets for the nocturnal sighting of a nude swimmer. That should take some business away from the casino.
Posted by Tattler at 11:06 PM