The Price Of Higher Education

Tertiary education is going to cost more in Singapore. With the Total Fertility Rate at a historic low of 1.16, do we really need another scary excuse not to have kids?

The country's 3 universities, 5 polytechnics and the Institutes of Technical Education made the announcement on Friday 14 January 2011. National University of Singapore Provost and deputy president, Tan Eng Chye, was pretty candid about his justification, "70 per cent of our budget goes to salaries. People would want to see their salary increase. I have to give salary increase for my staff as well." There's nary a mention of the quality or quantity of academic output of staff members who merit the financial bonanza. Productivity, it would seem, is not in the equation for the academic circle in Singapore. Nanyang Technological University (NTU), for instance, has tumbled 101 places, plunging from 73rd to 174th place in this year's edition of the widely viewed Times Higher Education World ranking of the world's top 200 universities. That won't be stopping them from hiking fees by about 4 per cent. (A NTU Engineering 2008 student wrote to say the increase is closer to 14.2 per cent for the new batch).

On 4 Nov 2005, eyebrows were raised over the NTU tender for 300 designer chairs. The business school of NTU was looking to buy 300 Herman Miller Aeron chairs costing as much as $2,200 each. Quite ingeniously, a 12-year warranty was specified in the tender so that the price paid will, when worked out over its lifespan, supposedly be similar to that of regular chairs, which cost less but may have a shorter life. Implying buying Ikea is akin to buying BATA - Buy And Throw Away. Since they have such expensive tastes, perhaps a peep into their books may yield some enlightening information - other than lecturers staring at students as cash cows crying out to be milked.

Looking at the 2009 Annual Report on their website, there appears to be a deficit of $129 million in 2009 (2008 was pure profit), no thanks to the $485 million expenditure on manpower. If you espy academics driving exotic cars, we know for sure where the money is going. There's also a total $276 million loss in investments, but the explanatory note is not in the pdf file. 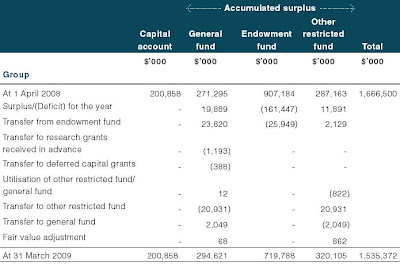 But if you look at their Accumulated Surplus, there's a nice stash of $1.535 billion as of 31 March 2009. Which means there's nearly 12 years of reserves for bad years like 2009. Do you feel the sense of deja vu? It's the NKF syndrome all over again! The question to be asked during this election year: why the fee hike now, when inflation is rearing it's ugly head? You don't need a degree or diploma for the obvious answer - the lessons of TT Durai have been conveniently shelved and forgotten.
Posted by Tattler at 1:01 AM