The Truth About Learning Mandarin 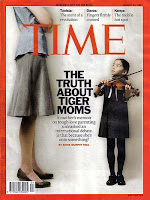 Amy Chua's book about sticking spurs into their hides to make sure her charges do not fall behind was not entitled "Hard Truths: To Keep Kids Going". Nor did she have free publicity help from Singapore Press Holdings to shoot up the best sellers list. In a way, she's very much like the guy who would rather be feared than loved.

But Chua can teach us something about language learning, "Rote repetition is underrated in America." Ditto Singapore. Professor of psychology at University of Virginia, Daniel Willingham explains, "If you repeat the same task again and again, it will eventually be automatic. Your brain will literally change so that you can complete the task without thinking about it." Once this happens, the brain has made mental space for higher order operations for interpreting for literary works, say, and not simply decoding their words. (Time, 31 Jan 2011)

There's no short cut to learning the Mandarin language, the hardest part of which  is the Chinese writing system. There are about 70,000 character entries in the Xinhua Chinese Character Dictionary, which is edited by the Chinese Academy of Social Sciences and the Commercial Press. According to the Chinese Language Association, an official research centre for Chinese language studies, 3,000 characters are most commonly used and needed for formal communication and reading. You must recognise about 2,000 Chinese characters to read a newspaper. In China, a person who grasps more than 1,500 Chinese characters is considered literate. The only way to learn Chinese is by memorization and constant practice. That's the hard truth.

Pinyin is just one method to "write Chinese" using the Roman (Western) alphabet, allowing students to concentrate on spoken Mandarin before tackling the formidable task of mastering Chinese characters. It is not a substitute for literacy in Chinese. There are numerous methods available for typing Chinese characters into a computer, from which the Ministry of Education has selected Pinyin for teaching of Mandarin.

In the press conference, Education Minister Ng Eng Hen said "keyboarding" will be used only at secondary school level. Primary school kids will still learn to write in the time honored system, stroke by stroke. So, after the kids have started on the correct path of learning Chinese via penmanship, they are to regress to use of Pinyin? Need we point out that Pinyin spellings can represent many different characters? Unless you know exactly which character you need, you will likely make mistakes when using the computer to write Chinese characters. But hey, what does Minister Ng know? He probably can't speak the language to save his life. Still, it's progress when you consider that Tharman Shanmugaratnam (Tamil -தர்மன் சண்முகரத்னம்) was once charged to head the learning of Mandarin.

Not too long ago, the principal of a popular girls' school was conned into adopting tablet PCs to "enhance learning", not realising that the hardware of that generation was rejected by the market because of crappy handwriting recognition software. It looks like the snake oil peddlers are at it again. For the educators and policy makers who swallow the poison, Amy Chua has one word for them:"garbage".
Posted by Tattler at 9:01 PM