Since it's a SPH publication that exposed MM Lee Kuan Yew to a barrage of flak never experienced before in the annals of Singapore history, it was no surprise that a sacrificial lamb had to be found. The extract published on page A6 of the Sunday Times, 30 Jan 2011, seems to serve the intent well. 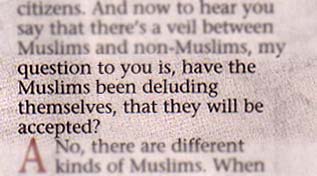 With the Pertubuhan Kebangsaan Melayu Singapura (PKMS) calling for the dreaded ISA provision to be invoked to haul in someone for "distorting and inciting racial and religious disharmony", editor Han Fook Kwang is obviously more suitable for the arctic cold airconditioning of Whitley Road Detention Centre than an ailing geriatric - after all, he was the one who proposed the Q&A format.


"May we advise that the ISA provision be applied to Mr Lee Kuan Yew and can he be detained and be further investigated for such subversive acts? No Singaporeans shall be allowed immunity if he/she committed the offence under: The Sedition Act (Cap 290)."

The Sunday Times extract from the offending book does not include the incendiary quotable like "I would say today, we can integrate all religions and races except Islam" or "Be less strict on Islamic observations and say,'Okay, I'll eat with you'. " Besides deflecting the barbs to a racially biased questioner, the same extract also alludes to "a younger generation of leaders" who may not know "how to manage them" and, out of fear, there "might be an overreaction". You see, everybody has erred, everybody, except MM Lee. He is perfect, he can do no wrong. He's like the character who can send you to hell, and get you thanking him profusely for the privilege.

Meanwhile Minister-in-charge of Muslim Affairs Yaacob Ibrahim, ever eager to get on with receiving his million dollar ang pows, disparaged all the deleterious dissonance with his "personal view" that, "looking at what he has painted, it (Lee's personal view) is at best a worst-case scenario." Now, what exactly does that mean? He can either stand with the people he is supposedly in charge of and reject the flawed accusation they cannot be integrated with he rest of society today, or be deluded and subscribe to the fallacy, for the few pieces of silver thrown his way. This is no freak flood of derisive comments that occurs only once in 50 years. This one won't wash so easily.
Posted by Tattler at 7:56 PM