Diversion In The Works

It's not nice to make an old man look like a fool.  In July 2010, after touring the waterfront development at the Kallang and Kolam Ayer areas, Lee Kuan Yew had silenced detractors by proclaiming that "whatever we do when we get extraordinary rains like we had recently, no amount of engineering can prevent flooding". The Public Utilities Board (PUB) has decided to do just that, spend lots of money on an epic engineering endeavor to prevent another act of God within the next 50 years. 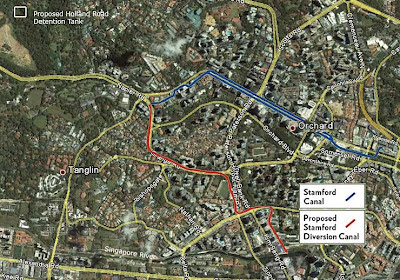 A 2-kilometer diversion will be constructed to relieve the flood-water load at Stamford Canal, and a 38,000 cubic meter water detention tank will be built underground near the Botanic Gardens - the free one, not the rip-off at Gardens by the Bay. The projects are part of the recommendations of a 9 month study, what PUB chief executive Chew termed "a multi-prong plan to strengthen flood resilience across Singapore." Included was a "more advanced" forecasting system and a weir to direct upstream water from Stamford Canal into the new diversion canal. The second diversion canal at Bukit Timah built in 1990 at a cost of $240 million in 1990 is 3 times as large as the proposed diversion. Even with this available as a guidance, PUB declined to commit on a number for the cost of the project undertaking.

The fellow in charge of the huge expenditure is - *palmface* - none other than the profligate Environment and Water Resources Minister Vivian Balakrishnan. Asked if the Stamford Canal initiative will be extended to other canals in Singapore, he gave his standard non-answer, "There's a fair amount of uncertainty because you can't predict the future." As was expected, Balakrishan declined to comment on the cost estimates, math being his Achilles heel.

What will probably happen is that he will report in parliament after the event that $XXX.XX millions were spent. Then  he will happily recall that the budget, after due consultation with and approval of the prime minister, was $XXX.XX millions, accurate to the second decimal point. That was the YOG fairy tale told at the Clementi Election Rally of GE 2011, and it got him re-elected.