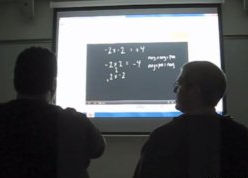 Real life teachers Golden and Coffey made a parody video of a Khan Academy YouTube lecture about multiplying and dividing positive and negative integers. Not disputing that Salman Khan, hedge fund analyst turned online tutor, is both brilliant and talented, they point out that "he doesn’t know much about pedagogy, the science of teaching information effectively." Towards the end, at about 11:29, one of them remarks, "Bill Gates thinks he's the best teacher in America? That explains a lot about Windows."

To be fair, everybody knows Gates dropped out of school to rush into making money, so he didn't really spend much contact time with teachers. Gates was so enamoured of Khan's use of the internet as a core component of instruction, he gave him a US$1.5 million grant. Which should really help boost PC sales to schools. Khan is aware of his detractors, which he dismisses by saying it's like telling Bill Gates, "Look, you don't have a M.B.A., so don't do business." (TIME, 9 July 2012)

Frankly, 12 minutes is an awful lot time to spend on multiplying and dividing positive and negative integers. "Converting Yards Into Inches" takes 5 minutes 49 seconds. But can he actually explain "Open Market Operations" in 12 minutes? After all, it's a subject right up his alley. At 4:19 he starts on his "I don't want to get too technical just yet", and also (at 5:54) alludes to another video to expand on the subject ("I'll do a whole video on that, so don't too confused"). Let's just say it's easier to understand "round-tripping" by City Harvest Church leaders as explained by Channelnewsasia graphics.

Khan deserves credit for the effort to explain, whatever the subject, instead of resorting to the odious Teo Chee Hean repartee "What do you think?" Chan Chun Sing is no better.  Instead of providing a substantive response to the reporter's question on narrowing the gap between the have and have-nots, he goes off on a tangent about aspirations of graduates with this throwback, "What would  be an acceptable range?" The Reuben Wang generation would surely know how to answer that. Cocking a snook at Vivian Balakrishnan, Chan boasts, "We will control 2015 SEA Games budget," without offering any concrete numbers to be measured by. S$1.33 billion has been allocated for the Sports Hub, due for completion in April 2014. How about a progress report on that budget?