Lawyers Do It Too

National University of Singapore (NUS) associate law professor Tey Tsun Hang was arrested by the Corrupt Practices Investigations Bureau (CPIB) in April this year for allegedly giving out a good grade in exchange for sex. To date he has not been suspended by the university, he still gets to keep his Herman Miller seat (or equivalent) - poor Nparks staff had their Brompton bikes taken away.

Maybe it has to do with the precedent set by Ministry of Education (MOE) when they allowed their scholar Jonathan Wong to teach in a Secondary School in July 2010 despite being arrested for possession and making of child pornography in the United Kingdom earlier in March. MOE's lame excuse was: “His offence only came to light after he was charged in court in November.” NUS has to come up with something more credible.

Tey joined the Faculty of Law in 1997. He started off as a Justice's Law Clerk before being appointed to the Subordinate Courts as a District Judge, and moved on to be a State Counsel at the Legislation Division of the Attorney-General's Chambers. He had been a member of the Editorial Committee of the Singapore Journal of Legal Studies and the Singapore Journal of International and Comparative Law, and the Executive Committee of the Centre for Commercial Law Studies. Until 2008, he was the Deputy Chief Editor of Singapore Year Book of International Law. Is he another of those too big to fall?

An NUS spokesman said that the university has a code of conduct that its staff must adhere to. But the one on its website makes no clear reference to staff, only how students should behave. 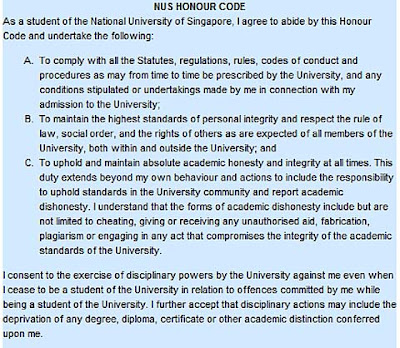 Specifically, a student must not be caught "giving or receiving any unauthorised aid" that compromises the integrity of the academic standards of the university. The student also has to accept any disciplinary action that may include "the deprivation of any degree, diploma, certificate or other academic distinction conferred." That sucks, especially when NUS has told the media about the fate facing their testosterone driven don: "Possible consequences of violating the Code of Conduct range from a warning to dismissal." A slap on the wrist cannot be discounted.

According to The New Paper, the teacher-student arrangement was not a one-off liaison dangereuse, Tey had sex with the 23 year old female on multiple occasions. Elsewhere it is reported that the student approached Tey first for a better grade in the elective he taught. As we saw in the case of another high profile sex-for-gratification case, "obtain" and "accept" could be crucial words to determine the legal outcome. In other words, there's still wriggle room. Heck, defence might demand the equivalent of a Monica Lewinsky stained dress as irrevocable proof of wrong doing.

What boggles the mind about this blowout is that it involves a law professor, a student studying law, and shenanigans in the law faculty - do they actually teach law, or sex-ed? Instead of producing legal eagles, they seem to be churning out legal beavers. We should ask the Law Society for a comment, but those guys have their hands full with members acting on their own volition.