One Flew Over The Cuckoo's Nest

In the Jack Nicholson movie, the sane actions of men contrast starkly with the insane actions of the institution.  It is a Catch-22 situation: only a sane man would question an irrational system, but the act of questioning means his sanity will inevitably be compromised. The authorities in charge decide who is sane and who is insane, and by deciding so, they make it reality, resorting to extreme measures like lobotomy. The slippery slope can start with a letter from your friendly neighborhood doctor. 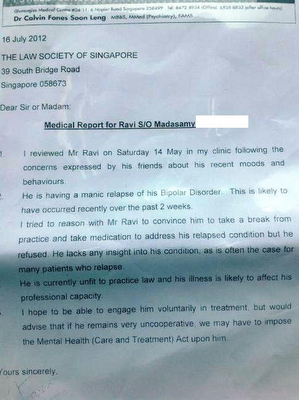 Forget about the cast from the Bromptongate debacle - Bikehop Director Lawrence Lim, NParks Director Bernard Lim, Procurement Manager Wesley Su - this one could be a bigger blockbuster.

M Ravi - Lawyer representing Mdm Vellama Marie Muthu in Hougang by-election case
Eye witnesses who saw him in action at Supreme Court No. 3B on Monday morning of 16 Jul 2012 at 10am did not think anything was amiss when he presented Mdm Vallema's case before Justice Philip Pillai.

Justice Philip Pillai - the presiding judge
He was reported to be upset with the surprise intrusion into his Court room, characterised the action of the party crasher as “unprecedented” and admonished him accordingly, "How is it you have the audacity to come and turn up in court when you don't even have an application?"

Wong Siew Hong - representative from Law Society of Singapore (LAWSOC), Director of local law firm Infinitus Law Corporation
This maverick's cameo performance is best described by the account of one observer in court:

"While the AG was speaking, a lawyer representing the Law Society (whom I shall call "the LS lawyer") entered the Court with a companion in tow. The LS lawyer wore the Court gown, thus indicating that he wanted to address the Court; his companion (whom I recognised to be an employee of the Law Society) was in long sleeved office shirt, no jacket. They stood conspicuously there at the side, between the AG and the Judge.

"The LS lawyer held in his hand a transparent sheet protector containing a single piece of paper which looked like a letter. The AG stopped his presentation and said to the Judge something like he was agreeable "to yield" to the LS lawyer.  But the Judge seemed to indicate to AG to finish his submission without interruption, so the AG continued speaking.  As it was obviously awkward for the LS lawyer and his companion to remaining standing where they were, they then walked to sit down on available chairs.

After the Hearing, I found out that the LS lawyer had wanted to interrupt the Court proceedings to present a letter alleging that M Ravi was unfit to practise law."


A spokesperson for LAWSOC has confirmed that “The Law Society informed the judge of the contents of the letter as it felt that it was in the public interest to do so, and as officers of the court. To be clear, there was no application whatsoever by the Law Society to in any way prevent Mr Ravi from appearing in Court.”

Dr Fones Soon Leng Calvin - psychiatrist in private practice, Gleneagles Medical Centre.
Since LAWSOC denies any attempt to prevent Mr Ravi from appearing in Court, why did the good doctor write ”we may have to impose the Mental Health (Care and Treatment) Act upon him" ? The plural we is normally used to denote oneself and another or others, except when used by royalty in the singular, or someone affected with illusions of grandeur.

Guess who's the cuckoo bird in this production?