At the annual Public Service Commission's (PSC) scholarship ceremony Deputy Prime Minister Teo Chee Hean said, "Officers know that as stewards of public resources... they must guard against any behaviour that can erode the trust Singaporeans have in the public service." Integrity, service and excellence will remain core values of the Singapore public service, rattled on DPM Teo. Notably missing were transparency and accountability.

The Ministry of National Development (MND) has suspended the National Parks Board (NParks) officer in charge of procuring 26 units S$2,200 Brompton foldable bicycles in a shady deal that should have warranted the attention of the CPIB or CAD. The fact that National Development Minister Khaw Boon Wan earnestly defended the purchase of the pricey designer bikes as "valid" to enhance work productivity implicates him as accessory to "behaviour that can erode the trust Singaporeans have in the public service". Worse, MP Lee Bee Wah pointed out that the MND investigation was focused on the procurement process and not over the cost of the bicycles. That explains the Herman Miller chairs.

The NParks officer fingered for the transaction was not mentioned in the statement issued by by MND last night. Alternate media has narrowed it down to two possibilities, NParks Assistant Director (Bernard Lim) or Procurement Manager (Wesley Su). Since neither are under aged females, gag order should not apply. Strangely, Straits Times (but not TODAY) reported this morning Lim was named. Perhaps no willing scapegoat was prepared to take the fall, emulating the successful stratagem of the plastic surgeon. And guilty parties get to continue as "stewards of public resources". Khaw got himself out of the line of fire by initiating the MND Internal audit after the dirty laundry was aired on the internet, specifically the damning evidence about:
- Timing and duration of tender notice;
- Contrived tender specification;
- Award to neither authorised distributor or network of dealers.

MND, for opaque reasons best known to themselves, deem these discrepancies as inconclusive, and merely "suggested the possibility of bias". Bias is just another word for cronyism, defined as partiality to long-standing friends. Wikipedia states that "democratic governments are encouraged to practice administrative transparency in accounting and contracting, however, there often is no clear delineation of when an appointment to government office is cronyism." So much for the vaunted "integrity, service and excellence" core values supposedly cherished by DPM Teo. You know what to think. 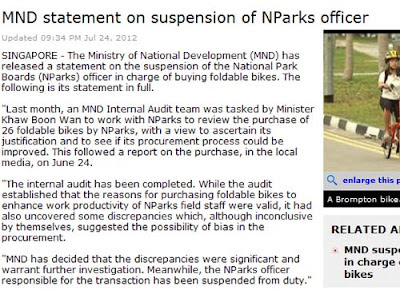