Temasek In The Rough 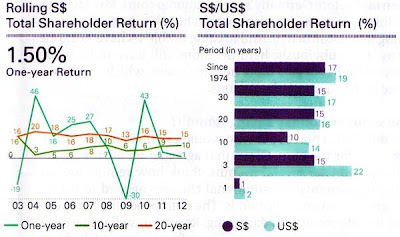 Temasek's portfolio value hits a record $198 billion, screamed the headlines, while smaller fonts disclosed that the rate of return on shareholder funds was a miserable 1.5 percent. Hey, anybody can be a big spender, it's what you get in return that matters - and justify a high paying job. And 1.5 percent is easily attainable at most banks for long term fixed deposits in the right currency mix.

Apparently Temasek has an internal benchmark of 8 percent rate of return, and Wealth Added bonuses are distributed to its staff when this is exceeded - GDP bonuses, national bonuses, wealth added bonuses, the powers that be can be real creative when it comes to rewarding themselves. Meanwhile, the citizens who contribute to the source of funds for their monopoly games are limited at 2.5 percent return. The previous year's report card was 4.6 percent, which makes the number for fiscal year ending March 31 look real bad. The return over 38 years since its inception in 1974 has always been showed off as an annualised 17 percent.

Temasek profit fell 16 precent from $12.7 billion to $10.7 billion. That didn't stop Temasek from splurging another $5 billion in it's shopping spree.  Like $2 billion in US based shale gas producer FTS International and $1.3 billion in fertiliser producer Mosaic Company. These investments helped boost its exposure to North America and Europe from 8 to 11 percent, two geographies which are not exactly in the pink of economic health.

We are also told Temasek made $22 billion worth of investment in total, against $15 billion of divestments. What we are not told is whether Chesapeake, whose stock tumbled more than 30% in the last financial year, is featured in either exercise.

In May 2010, Temasek Holdings and Beijing-based Hopu Investment Management Company agreed to buy a combined US$600 million in convertible preferred stock of New York-listed Chesapeake Energy, and an additional 30-day option to acquire a further US$500m of the stock. The convertible preferred stock carries a coupon of 5.75 per cent and the proposed US$1.1 billion investment will translate to about 7 per cent stake in Chesapeake.

In April 2012, the NY Times reported that controversial borrowing practices by Chesapeake Energy’s CEO Aubrey McClendon raised additional scrutiny by the Securities and Exchange Commission (SEC), as well as sinking the company’s debt rating. Temasek Holdings’ investee company, Chesapeake Energy Corporation, had its debt rating cut to ‘BB’ which is a “Junk” or Non-Investment Grade by Standard & Poor’s.

As recent as 3 July 2012, Reuters reported that the U.S. Justice Department is probing Chesapeake Energy Corp and Encana Corp for possible collusion after email leaks showed that top executives of the two rivals plotted in 2010 to avoid bidding against each other in Michigan land deals. In one email, Chesapeake Chief Executive Officer Aubrey McClendon told one of his deputies on June 16, 2010, that it was time "to smoke a peace pipe" with Encana "if we are bidding each other up."

In the light of all these disclosures, any other CEO would start to polish up his or her resume. But we are talking about Temasek Holdings.