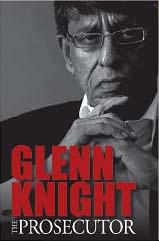 The antepenultimate sentence in the last paragraph of Glenn Knight's autobiography ("The Prosecutor") is a curious statement: "Nowadays, the law has become more important that the facts." It makes one wonder how the rule of law in Singapore has changed since the first director of the Commercial Affairs Department started practice at the Singapore Legal Service in 1970.

Knight writes that the catalyst for the abolishment of jury trials was the case of the "Body in the Box" in which the accused was meted out a lower sentence because of "one obnoxious member who was pushing for the death penalty". The recording of Justice Choor Singh (presiding judge) in the Oral History Centre has it that the father of the victim complained to the newly minted Prime Minister Lee Kuan Yew, who then told Justice Choor Singh steps would be taken to change the law (page 54).

In another instance of the determination of law by one man, Chief Justice Yong Pung How in 1996 concluded that Tan Koon Swan was wrongly convicted in the Pan-El insider debacle, over-riding the legal opinions of Justice Lai Kew Chai, Justice Frederick Arthur Chua, and Chief Justice Wee Chong Jin (page 163). Yong is remembered for the speed in which trials are conducted, leading some critics to accuse him of convicting indiscriminately, leaving the burden of proof to the accused. In the hour long defence of his appointment as Chief Justice in parliament, Lee disclosed that the loan of Yong's lecture notes enabled him to catch up with his studies at Cambridge. ("The Politics of Judicial Institutions in Singapore", Francis Seow)

When the Corrupt Practices Investigation Bureau (CPIB) came calling at his La Salle Street house, he had just been awarded the Public Administration Medal (Gold) in 1990. Knight says a deputy in charge of the department admitted that they had nothing against him, but were investigating him for "misconduct". There were rumours though, unsubstantiated, that he was "investigating" Lee Kuan Yew's brother, Lee Kim Yew.

As in the recent revelation of the backroom deal offered by Deputy Director Teng Khee Fatt to ex-CNB chief Ng Boon Gay, the CPIB had asked Knight if he would "like to surrender and admit to any wrongdoings" (sic). At the end of day, Knight was never charged with corruption (page 188). But the system demanded satisfaction, as in the Shakespearean contract that Shylock may take a pound of Antonio's flesh from any part of his body Shylock chooses. Some things just never seem to change with the passage of time.