It's official. For the second day running, the strike is on. After SMRT's packet of lies (the strikers on Monday numbered 171, not 102), 88 drivers from China stood their ground for their right of protest. 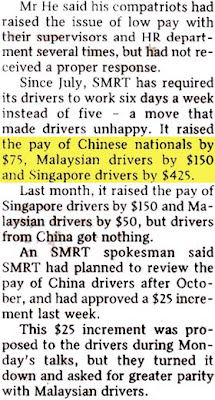 While the ex-army officer (Desmond Kuek was the 6th Chief of Defence Force of the Singapore Armed Forces) they hired to run SMRT is taking cover in his bunker, another ex-general tried to explain why it took him so long to understand the meaning of the word "strike".  He probably had to ask permission from the boss first. "Sir! Permission to think, Sir!"

Brigadier General and Acting Minister of Manpower Tan Chuan-Jin said it took a whole day for the Government to call the protest a strike because, "The labelling of industrial action such as this is not trivial.. it would then open up  a series of actions that would follow thereafter." Right, a post on the Tianya forum reminded the military men that China successfully landed a jet on their new aircraft carrier Liaoning, "That is why we need to build more aircraft carriers and send them to Singapore's footsteps." But what must really get Tan's knickers in a twist was the Chinese Embassy calling on his Ministry of Manpower to safeguard the rights and interests of Chinese workers according to local laws. (China News Service (CNS) said the embassy was monitoring the situation closely and had sent officials to take part in the mediation).

Rights and interests of workers that even Singaporeans are not aware of. Like, strikes are legal if rules are followed as stipulated in the Trade Unions Act and Trade Disputes Act. Workers can go on strike, but they must follow rules such as giving their employer 14 days of notice. Rules which are rubbished for "essential services such as transport and postal services" by the tougher provisions of the Criminal Law (Temporary Provisions) Act. We know what happened in 2002 when Singapore Airlines pilots planned their strike. Brass knuckles were brought out in a hurry.

Ignoring the query that SMRT management may have fallen short - them generals sure know how to cover each other's backside - Tan still refused to call a spade a spade, saying it would be "inappropriate at this stage for us to make any definitive proclamations(sic) either way." So when would be an appropriate time, when the strike force from Liaoning is on the way?