One of Glenn Knight's many war stories highlighted that in the early days after the Misuse of Drugs Act was first passed in 1972, the Crime Division of the Attorney-General's Chambers thought that a presumption in the law allowed  them to charge a man with drug trafficking if he was found in possession of more than a specific amount a controlled drug. He explained that the law was borrowed from a Canadian stature, but the law makers forgot to render the act of possession of the drug to be equal to the act of trafficking - sale, transport or delivery - of the drug. It was David Marshal who rightly pointed out that possession, in itself, was not sufficient to prove the act of selling or transporting the drug. That didn't stop Knight, wearing the hat of Deputy Public Prosecutor, from pressing for the kill, by arguing that in murder charges, they did not have to prove the elements of the charges, and all they needed to do was to prove the act of murder.

This was during the bad old days before, per earlier post, Knight had observed, "Nowadays, the law has become more important than the facts." 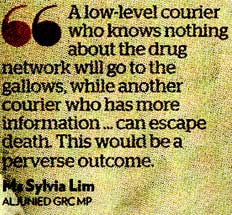 Problem is, the law hasn't improved much hence. Ms Sylvia Lim rightly pointed out that meting out harsher punishment for those in the lower rungs of drug syndicates - small fries with no access to the inner workings of the syndicate - is a perverse outcome of the "substantive assistance" requirement to escape the gallows.

Imagine that one faithful day of reckoning, when the guys in white are marched up one by one to the guillotine, in the fashion of the French Revolution finale. Should the Minister without portfolio in the Prime Minister's office escape the chopping block because he has so many secret stories to tell, while sacrificing the neophyte  who rode into parliament on the coattails of someone senior as she stomps and screams "I don't know what to say" all the way to be the nasty end?

Nominated MP Laurean Lien reminded the House that "every human life is precious". He said, "It is not just about our criminal justice system, ... it is also about the type of society that we want to build - a society that values every person and every human life, and one that doesn't give up on its people." Those that gave up on us - housing, transportation, jobs, education, healthcare - will be getting their just deserts one day.