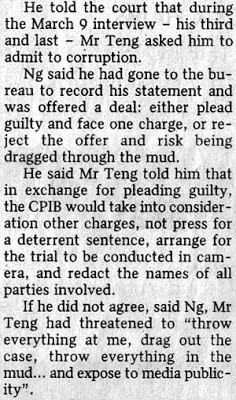 If they had intended to drag out the case all along, they surely have achieved it. Come December, the sorry saga of the ex-Central Narcotics Bureau (CNB) director would have been played out for one whole year. Has anybody imagined what it must be like for Mrs Ng Boon Gay?

Hillary was praised for her stoic stance and demeanor throughout the shameful Lewinksy episode. Her detractors claimed she stood by her husband because, he was the President, and she had harboured personal presidential ambitions. Maybe that helped with the fortitude when Independent Counsel Kenneth Starr sunk into unprecedented lows to indulge in salacious details like which part of the female anatomy the President had inserted a cigar tube. Is this how public prosecutors get their kicks? Where in a corruption case do we need to know whether the parties in oral engagement quiz each other, "was it good for you too?"

While Clinton maintained "I did not have sexual relations with that woman", Ng was more forthright about his infidelity. For a woman and faithful wife of so many years, that must really hurt. The Gallup survey couldn't have included her in their sample to buttress their finding that Singapore is the world's most emotionless society. Gallup had polled 1,000 people aged 15 and older from 150 countries and asked questions like "Did you smile or laugh a lot yesterday?" The people they asked must have been sick with worry about making the house payments, having enough for retirement without resorting to "imputed rent" as a source of income, and praying they never ever have to be admitted to a public hospital.

We don't know what Mrs Petraeus, spouse of 37 years, is going through right now. Not everyone can do a Kathy Holmes, and sign away a pre-nuptial agreement that excluded her from Tom Cruise's US$250 million fortune. We would like to believe that Mrs Ng forgave her husband's indiscretion for reasons more basic, like the marriage vow "to have and to hold, from this day forward, for better, for worse, for richer, for poorer, in sickness and in health, until death do us part." Some things in this world are still worthwhile to cherish.