Perils Of Staying On State Land

When residents living on idyllic Pulau Ubin received a letter informing them that their homes are slated for "clearance", what else could they think of except that another land grabbing exercise is in the offing? The letter from the Housing Board document even spelt out that officers will be visiting their premises to conduct a "census survey" and determine their "eligibility of resettlement benefits". At least they are rendered compensation courtesies denied the residents of Bukit Brown.

As soon as the news hit the airwaves, the Ministry of National Development and the Singapore Land Authority quickly issued a joint statement on the same Friday the story broke. This time the government is saying the residents on Pulau Ubin will not be evicted and there are no plans to develop a new adventure park on the island. However, if affected residents do decide to remain in their homes, they will have to pay rent from now on because they are staying on state land.

So if the residents who have not been paying rent all these peaceful years, stand firm and refuse to do so in future, will they be evicted? Or will they be "formally escorted" by the Singapore Police Force to new accommodation in Changi? 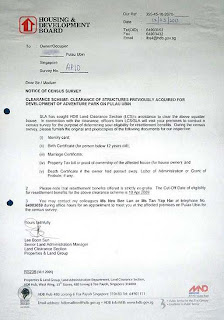 It seems the word "eviction" has acquired the same odiferous distinction as "strike". Once again, a spade is not allowed to be called a spade. It is quite obvious that the Housing Development Board, the Ministry of National Development and the Singapore Land Authority don't share the same dictionary. Either that or the top civil servants in those departments are having their own turf wars, in the rivalry spirit of the SCDF, CNB and SPF.

The agencies "clarified" that the notices given to 22 households in March were a follow-up from a previous exercise. Problem is the previous exercise inferred to is a projected mentioned in 1922. Back then, it was reported that the Government would acquire 254 ha of the private land on Pulau Ubin within the following year, partly to create an adventure park. Will the residents staying on state land have to back pay the rent for the years 1922 to 2013? Maybe another government can come up with a clarification about the clarification. One thing's crystal clear, when there's money to be collected, these guys have elephantine memories.