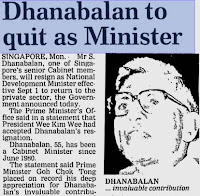 When his Ministry of National Development staff gave him a tearful send off in September 1992, Dhanabalan told reporters he would be spending more time with his church. When he had to make way for Lim Boon Heng as the new Temasek chairman on August 2013, he said same: spending more time with his church, currently Bukit Panjang Gospel Chapel. You gotta take that with a large pinch of salt.

My uncle met him at a Varsity Christian Fellowship (VCF) gathering eons ago, when he first donned the white and white uniform (him, not uncle), and asked him why his political party seemed to be unpopular among some circles. The cocky response was that, with 70+ of the votes, they had to be popular. Period. End of sharing.

When he was in charge of Development Bank of Singapore (DBS), there was a time when the bank paid the lowest salaries on the island. Asked why, he said he prides DBS as the training center for Singapore bankers. The mass migration to the other banks continued unabated. To halt the stampede, he quietly revised the pay scales to match the market rates.

Then he killed the POSB girl. Many, including yours truly, closed all their accounts and moved their money to another bank, any bank. Queried by the press, he boasted that the impact of the POSB takeover was minimal. Insiders reported a different story, and POSB was revived.

When SingaPolitics wrote in the Sunday Times that "a rare breed of leader (was) lost with Dhana's exit", they must have originally intended a piece on fiction.