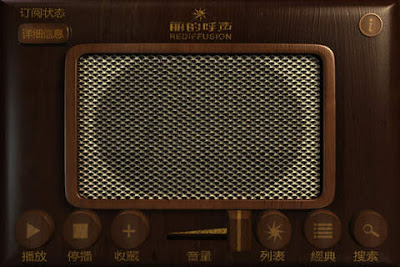 Grandma's delight was priceless, her face lit up when she heard the familiar sounds from the Rediffusion app. Immediately she was transported back to the glorious past and relived the stories and music of yesteryear. The years when she first struggled to build a modest family tree as a washer woman, and her constant companion was a minimalist wooden box that spoke her mother tongue. The years before dialect programming was taken off the air. One of the saddest scenes of today is at family get togethers where the youngest addition and the most senior member can only exchange mute greetings, unable to surmount the language barrier.

When the nation wide Speak Mandarin Campaign was launched, Rediffusion was forced to halt all dialect content by 1982. Facing the ban and increased competition from free-to-air radio, subscription plunged, and Singapore's only cable radio service finally fell silent on 30 April 2012. Mercifully, Eduplus Holdings bought over the assets and audio material and is now making available the archived tales and tunes of a nostalgic era in heritage dialect.

What we did not know about was the determination of one man to deprive grandma of her simple pleasures.

When filial elements in the Government were looking into reintroducing Chinese dialect programmes on free-to-air channels, Lee Kuan Yew put his heavy foot down. "I had antagonised an entire generation of Chinese, who found their favourite dialect programmes cut off.... Why should I allow  Cantonese or Hokkien to infect the next generation? If you bring it back, you will find portions of the older generation beginning to speak in dialects to their children and grandchildren," according to his One Man's View. Apparently he's still sore Lee Dai Sor was more popular than Lee Kuan Yew, the man who "paid a heavy price getting the dialect programmes suppressed and encouraging people to speak Mandarin." Dude, suppression of any form is never popular in civil societies.

He would rather let the older folks live their last days in silence, unable to communicate with their children and grandchildren. This has to be the saddest tale of all history.