Giving People What They Want 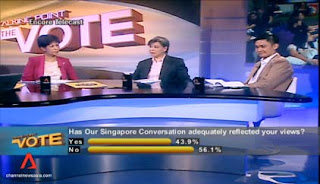 Prime Minister Lee Hsien Loong first announced the idea of a national conversation during his last National Day message, and it started with this blurb: "Welcome to the National Conversation, where we invite all Singaporeans to share about our dreams, views, and thoughts on what we want for our country. Diverse views are welcomed, regardless of race, language, religion or political affiliation." Somewhere along the line, it has morphed into "Our Singapore Conversation" (OSC).

After one year-long of national conversation involving some 47,000 Singaporeans or less than 1% of the population, the man in charge wants to dispel a few myths about the mass engagement exercise, without providing any clue for the name change, and who the "our" refers to.

The first myth to be debunked is that OSC dialogues were a "major meet-the-people session", with the Government collating a wish list and then giving people what they want, explained Education Minister Heng Swee Keat. The disappointment is understandable.

Last night's episode of "Talking Point, The Vote " concluded with over 56% voting "No" to the question, "Has Singapore Conversation adequately reflected your views?" The online inputs to the tv programme were, to borrow the words of a panel member who was a facilitator at OSC sessions, quite cutting and blunt:


"Talking about consultation? I seriously doubt they listen at all! Some of the issues raise (sic) were not even consulted and they made the decision for us. Eg. CPF minimum sum."

"Why is it that mental health issues which I raised at OSC and also to Education Heng Swee Kiat who promised to look into the welfare of caregivers of the mentally ill not looked into?"


Guest on the panel, Indranee Rajah could only bluster there are also "other opportunities" available for feedback from the public. Which confirms what Heng said about the OSC not being a platform to collate a wish list and then giving people what they want. Quite simply, they never intended to listen to the voices of the people in the first place. Whether NC or OSC, it was always a one sided conversation.

Heng said the OSC-influenced policy shifts will be unveiled only at Sunday's National Day Rally. Confirming the worst, he emphasised that they will not sacrifice strategic thinking for the sake of showing empathy and responsiveness. So what else is new? It has always been their way or the highway.

When Lee talked about the vision of Singapore along the themes of "Hope, Heart and Home", one is reminded of Goh Chok Tong's promise of "Swiss standard of living". Sure, the Swiss standard has been attained, for them but not for us mere mortals. If Heng openly refuses to demonstrate empathy and responsiveness, where and when will we ever get to see our Hope, Heart and Home?

One almost trembles at the anticipated announcements concerning state support for health-care costs and housing affordability. More likely, Medisave minimum sums and Medishield premiums will be increased - Health Minister Gan already highlighted that they will go up with enhancements planned for to the scheme - and housing affordability will be redefined with 30 year loans extending to 50 or 60 years. You want empathy and responsiveness, you won't find it in the OSC charade.