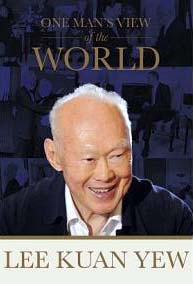 You know credibility is at stake when the picture on the cover bears faint resemblance to the present day subject of another ghost written excuse to fill the book shelf. Asked why he would want to "write" another book, Lee Kuan Yew, 89 going on 90, said, "To recount what has struck my life before I lose my memory."

The ghost writers, Han Fook Kwang et al says  - unlike the earlier two volumes of memoirs, "Singapore Story" and "From Third World To First" - this 400-page exercise in ego massage focuses more on the future than the past. Lee must be the only person who has "memories" of the future. Artistic licence has just embarked on a new frontier.

As in previous publications, Lee just can't resist insulting other countries, "The iPhone, iPad, Microsoft, the Internet - these were created in America, not elsewhere. The Chinese have many talented individuals compared to the Americans, but why have they not been able to come up with similar inventions?"

Sorry, America is not on the decline, not because of the power of creativity. The success of America is ensured by its full embrace of democracy. The problems with the Arab Spring is not that democracy has failed, or that Egyptians lack the cultural and sociological reasoning to appreciate equal citizenship.  The problems lie with the damage inflicted by the cabal rule of dictators like Mubarak on a nation, damage which will take years to unwind. The best bit about America is that the presidents are limited to two terms. Somebody else is always given a chance to contribute his best for the nation. One-man rule, or one-cabal rule, is the cancer of civilisation.

Lee once said he will call it a day when his stories can fit into a thumbdrive. Well, the 2 volumes of Hitler's Mein Kampf take up only 1 megabytes (mb), 3 Lord of the Ring books 2 mb, 7 books of the Harry Porter series 6 mb, and the Oxford Complete Works of Shakespeare occupy only 7 mb of disk space. Even "The Untold Story of Mao" by June Chang and Jon Holliday, 1780 pages of text and photographs, require only 6 mb. It is doubtful all of Lee's books can even fill up a 2 GB drive. Han said he thought Hard Truths was the last book, and his subject could not endure interviews longer than 1 hour for this one, so why is he still on the payroll?