Batman Will Be So Envious 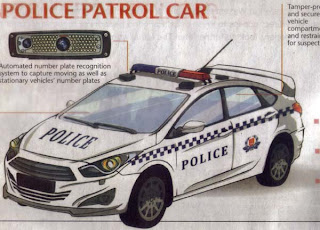 What the Singapore Police Force (SPF) wants, it is sure to get, and damn be the budget - that's the impression we are sensing here. We are not talking about Herman Miller chairs or Brompton Bikes, this is serious money for a super duper "gizmo-packed patrol car" that will make the Batmobile look like a Category A China import. The future police car will have a 2 to 3 litre engine capacity, definitely Category B.

Based on requirements listed so far, each high-tech fast response vehicle will be equipped with state-of-the-art GPS navigation, in-vehicle video system with four point recording and an automated number plate recognition system enhanced with night vision thermal imaging. And if the wish list seems a bit over the top, there is this locator tracker that can be fired to latch on a target vehicle  so the officers can track it at a later convenient time. Like when the exciting movie on the video system has ended.

Whatever happened to the effort to emulate the Japanese system that has police officers patrol the neighbourhood on bicycles? Japanese police departments try to be as visible in the community as possible, not hidden in a climate controlled air conditioned automobile with personal comfort system "suitable for prolonged seated operation and safety".

While they are at it, why not buy the Lotus Esprit Series 1 "Submarine" car that was featured in the 1977 James Bond film, "The Spy Who Loved Me"? Propelled through the water by a working electric motor, the vehicle would be perfect for patrol duties in the flood prone areas. It was last sold by RM Auctions on 9 Sep at 616,000 pounds (US$967,000), but it's a heck cheaper than a F-35B Lightning, the plane that AOL Defense reported Singapore will be ordering 12 units at US$108.5 million a pop (price tag as of 30 July 2013).