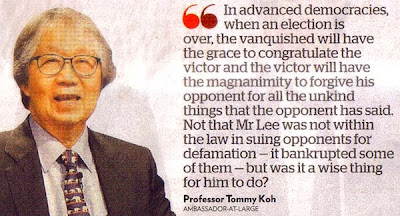 Omigosh! Did Tommy Koh really say that? Elsewhere in the mainstream media, every one is singing the old man's praises on cue, including one guy who claims the clean toilets at Changi Airport are attributed to his personal intervention.

Former Law Minister Jayakumar, still sprightly for his advanced years, was quick to jump to the defence. Paraphrasing his successor Shanmugam, and using similar vernacular, Jayakumar said, "He can be criticised for foolishness, maybe even for incompetence, for arrogance, but his red line was - not on reputation and integrity." Actually, Shanmugam had used words like "stupid fool" and "don't know what they're talking". Jayakumar is retired, Shanmugam is still on the payroll, so former can get off with the harsher "foolishness", "incompetence", and "arrogance". Both draw the same line on corruption though, as in Minister of National Development Teh Cheang Wan caught taking in cash on the side.

Which kind of justifies Tang Liang Hang being bankrupted and booted out to Australia. For good measure, Mrs Tang suffered same treatment. Tang was the chap who raised the issue of the Hotel Properties Ltd (HPL) condominium purchases during an election campaign, specifically the discounts received by father, son, mother, daughter and assorted relatives from a company which happened to have a brother on board as director.

Prof Koh also touched on the some Singaporeans' view on the Internal Security Act (ISA), as an example of "rule by law, rather than rule of law". Here, it was ex-chief justice Chan Sek Keong who jumped in to say that the standard definition of rule by law is that the government is subject to the law and accepts so. In which case, there would rule of law, and the government is not "ruling by law". This from the guy who ruled that the Parliamentary Elections Act forbade unauthorized persons to loiter within 200 metres of polling stations on polling day, but does not apply to unauthorized persons who were already inside the stations.

With such clarity of thought on the subject of corruption and the law, one wonders why there have been some many long drawn corruption cases in the courts. The answer must be embedded somewhere in Mr Chan's open question, "If the government does not rule by law, in the technical sense, what else can it rule by?" Here we are reminded of how Pontius Pilate famously replied, "What is truth?" ("Quid est veritas?")