Edging Towards The Abyss 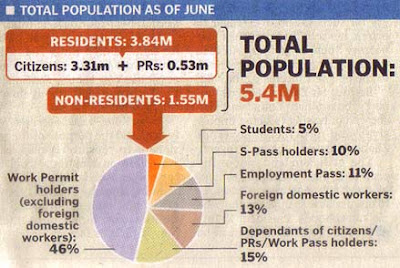 Birth rates have gone up, evidenced by the total fertility rate (TFR) growing by a 1.29 rate, compared to 1.20 in 2011. That's a healthy improvement of 7.5 percent. Before you start grinning like the jackass you saw on the live TV forum, the news is not all good.

The non-residential population in Singapore continues to rise unabated. It reached 1.55 million in June, up from 1.49 million a year ago, swelling up the total population figure by 1.6 percent, higher than the 1.3 climb in 2004. Since this relentless pace of growth falls neatly within the 1.3 to 1.6 percentage range used by the notorious White Paper for a target population of 6.9 million by 2030, the horror is confirmed.

The prime minister's assurance in parliament that the 6.9 million number was not a target, but a projection, ostensibly a "planning parameter", has just been shot full of holes by the National Population and Talent Division (NTPFD) report. Member of Parliament Liang Eng Hwa had to rub it in with his Freudian slip, "at this pace, the grow is more sustainable".

6.9 million is not sustainable. Even with the present population figure of 5.4 million, they are unable to cope with the housing demand. The PM himself said the additional buses and trains "will take a few more years, 2015, 2016." And Education Minister Heng Swee Kiat still thinks it's perfectly alright to spend $36 million to import foreign students, to feed, educate and guarantee them a job, so they can take away our own youngsters' lunches. How did we come to this?


"You know, the cure for all this talk is really a good dose of incompetent government. You get that alternative and you'll never put Singapore together again: Humpty Dumpty cannot be put together again... my asset values will disappear, my apartments will be worth a fraction of what they were, my ministers' jobs will be in peril, their security will be at risk and their women will become maids in other people's countries, foreign workers."
(Speech justifying million-dollar pay hike for Singapore ministers, Straits Times, 5 April 2007)