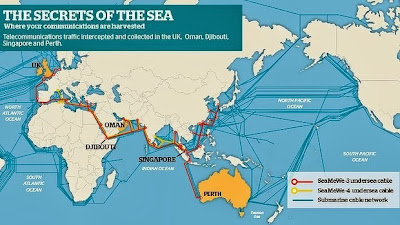 The Singapore Police Force (SPF) is busy refuting allegations in a British Broadcasting Corporation (BBC) World Service Radio interview concerning Singapore's (lack of) commitment to fighting match-fixing. BBC confirmed it had received a complaint from the SPF, "The BBC strives for balance and impartiality and in line with our editorial guidelines we asked the Singapore Police Force for comment but were not granted an interview. A similar request in March was also declined."

On another international front, the Sydney Morning Herald (SMH) on Thursday wrote that SingTel has been facilitating access for the Australian Signals Directorate (ASD) in a partnership with British, American and Singaporean intelligence agencies to tap undersea fibre optic telecommunications cables that link Asia, the Middle East and Europe and carry much of Australia's international phone and internet traffic.

The British Government Communications Headquarters (GCHQ) is also collecting all data transmitted to and from the United Kingdom and Northern Europe via the subsea cable that runs from Japan, via Singapore, Djibouti, Suez and the Straits of Gibraltar to Northern Germany. The SMH emphasised that access was facilitated through SingTel, which is publicly-listed but majority-owned by Temasek Holdings.

SingTel and Singapore's Ministry of Defence (MINDEF), in the manner of the SPF response to BBC investigations, have not responded to queries sent to them. The idiom "No smoke without fire" means that when people suspect something, there is normally good reason for the suspicion, even if there is no concrete evidence. To prefer to wait and then react to "allegations" is a curious choice. Have they learnt nothing from the haze inducing fires from Indonesia?

The news floating around the globe is consistent with The Guardian's newspaper report in June about the GCHQ interception program leaked by Edward Snowden, codenamed Tempora, that involves harvesting all data, emails sent and received, instant messages, calls, passwords and more, entering and exiting Britain via undersea fibre-optic cables. Australian intelligence sources have separately confirmed that their ASD and the highly secretive Security and Intelligence Division (SID) of Singapore's Ministry of Defence also play key roles in intercepting communications traffic through Asia.

She didn't need access to the secretive stuff to appreciate what is going on in Singapore. After receiving briefings from the Ministry of Education (MOE) on Singapore's education system, and the Corrupt Practices Investigation Bureau (CPIB) on anti-corruption policies, Aung San Suu Kyi was sharp enough to conclude, "Myanmar should not seek to recreate S'pore's policies". No country deserves to be cursed with MOE scholars with proclivity for pedophilia, or CPIB officers misappropriating money for casino visitations. Or top civil servants with fetish for oral gratification. She acknowledged that corruption cannot be "rid off entirely", no matter how much the office holders are allowed to pay themselves. Instead, she suggested  Singapore could learn "from us", a more relaxed way of life. "Perhaps, warmer and closer relations," and she wasn't exactly recommending the practice of installing relatives in the Istana.