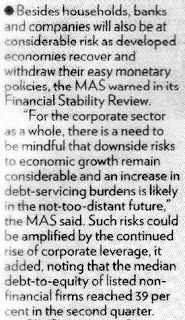 Now we know why they were so eager to hand out the bonuses. The members of parliament had an extra $15,000, but the jiak-liao-bee hoarding the Istana like his personal fiefdom pocketed another $250,000 - and that's a conservative estimate based on an annual stipend of $3 million. Never mind the if economy is going to tank.

The (usually) unflappable Monetary Authority of Singapore (MAS) is rolling out the scary words: ensuring stability and sustainability. MAS warned not only about the home loans - accounting for three quarters of total household and liabilities - which could be a significant source of risk. Small and medium enterprises may be exposed to greater jeopardy given the uneven recovery in the demand for their goods and services. With the US starting to wind down its monthly bond-buying programme from next year, the low interest environment will soon go the way of the dodo bird. Interest rates in Singapore could rise, to as much as 7%.

The really scary bit is the MAS warning about "credit quality deterioration", since the banks have expanded cross-border lending. Apparently the gross flow for funds between Singapore and China has grown by 85% since 2008. China, which was previously a net lender to Singapore, is now a net borrower from Singapore. Here's how MAS paints it: "Cross-border banking activity may carry greater currency mismatch risk than intra-country lending... Sharp or prolonged depreciation of domestic currencies may weaken borrowers' capacities to repay such foreign currency denominated loans." Fortunately, we have legions of "Ah Long" operators who are experienced in collecting bad debts. We just have to fly them over with cans of red paint to send the appropriate message: O$P$.

One local bank assures us that, although overseas lending had increased by more than 20% in the past five years, domestic lending continues to account for the bulk of outstanding loans. The local scenario is more likely to produce the perfect storm, a concurrent erosion of household net wealth and double whammy of higher debt-servicing costs. Meanwhile, the party goes on.