No Need For Santa

Stung by the torrent of criticism for the incongruous self-portrait taken during the state funeral of Nelson Mandela - world statesmen are not supposed to behave like giggly teenagers, taking "selfies" on their mobile phones - Denmark Prime Minister Helle Thorning-Schmidt learnt her lesson and mercifully did not post the sacrilegious picture online. Meanwhile member of parliament (Tampines GRC) Baey Yam Keng is still picking his scab of the fifty cent rose syrup drink. The local rag also failed to recognise the social media gaffe and came up with a two page spread to add insult to injury. 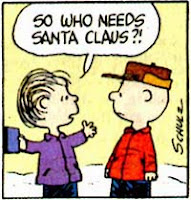 What we are led to believe is that a new paradigm shift has hit Sin City. It's okay to bribe, and be bribed. From discounts for hair styling to extra fish balls, if you are a "celebrity", the "c" word doesn't apply. Television and film personalities were rolled put to be quoted as being bowled over by enthusiastic givers. Significantly, the female IT vendor who purportedly begged a top uniformed civil servant to receive her oral offering was not mentioned.

Someone had set the precedent way back in 1996:


"It is a fact of life. There is no way for me or my wife having to join a queue to buy a house."
"Even if all the units were sold, they will find one unit for me, surely, and they will compensate that man with a special price at the next best building that they put up. Or Mr Ng Teng Fong would not be Mr Ng Teng Fong. So too Mr Ong Beng Seng."
(Hansard, May 21, 1996, cols 196,197)


The American multi-national we worked for had a policy, no gifts to be accepted unless it bears the engraved logo or name of the donor company. The sales person said he will lose his job if he had to take the gold Longines watch back to his boss, eager to cement the "guanxi" for a potential multi-million dollar contract. Okay, we'll take it, we told him, but we will put it under the Christmas tree for the year end party lucky draw. We don't know what a certain minister does with the giant durian log cake delivered by Goodwood Hotel this time of the year; at Chinese New Year, the usual is a pineapple tart with the diameter of a personal pizza.

Not everyone has the EQ of popular actress Michelle Chong, "When hawkers want to treat me to free food or drinks, I will insist on paying because I think they don't earn much." It's the hypocrite politicians in white you have to be careful about.