"PM promises pioneer generation a hongbao", screamed the headlines. What is not stated is who actually pockets the cash. 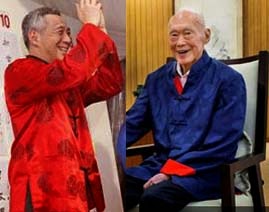 A neighbour's daughter wrote back from Amsterdam where she is on an exchange program to report that the student's bus pass for a year's free travel over there costs only 20 euros. Compare that to the monthly $27.50 here, or $25 for a ride in the sweat induced stinky trains. As a senior citizen with no source of income, even he has to pay $60 for a monthly "concession" pass.

The Year of the Horse has come upon us, but the horsing around just have to stop.

It's no coincidence the papers are hyping up the decline in profits for SMRT Corporation Ltd (SMRT)'s 3QFY14 PATMI. Before you start commiserating in the name of the William Wan's Singapore Kindness Movement, note they still have $14.2 million net profit for the quarter, down from $25.5 million netted a year ago, to distribute as ang pows to their shareholders and management committees. Embarrassed by the spate of breakdowns, slip-ups and general snafus, SMRT is desperate to justify the  $53.5 million about to be creamed off from the fare hike in April.

SMRT's spin doctors say that train disruptions were due to human error and equipment failure. What kind of humans allow a cable to be contacting an installation bracket and be chaffed to smithereens? Sounds more like an overdose of mismanagement and general incompetence. With the kind of salaries they are shelling out, there must be lots of experienced foreign talents to be recruited from the likes of Hongkong's MTR, London's Tube or Japan's Metro. Real professionals with domain knowledge, not flunkies on tap.

The young people at a recent dialogue with Lee Hsien Loong expressed anxiety about achieving a First World standard of living amid rising costs and more intense competition from foreign trash (FT) for jobs and at work. Their worries stem from regrets in being born too late to enjoy the leap in standards of living their parents experienced during the golden years. Their parents who could afford a car two years after graduation, and pay off the mortgage within 10 years. They should worry. With the forthcoming compulsory Medishield Life horrors, the hefty premiums imposed on the pioneer generation will surely add to the albatrosses around their necks.

Lee's response to the young worry warts was that "I wish I were born 50 years later!" So do we, so do all us, who had to put up with the last 10 crappy years. That way we can truly celebrate Chinese New Year with relief.
Posted by Tattler at 3:00 PM