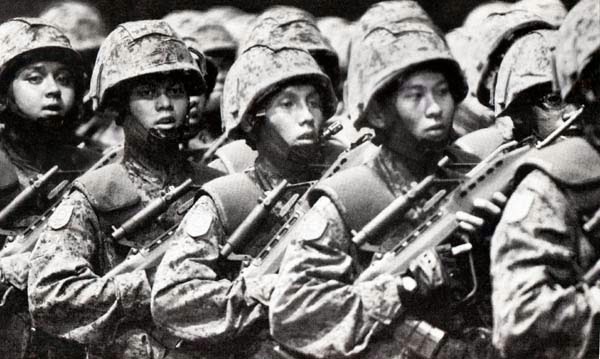 When Cassius Clay a.k.a. Muhammad Ali showed up at the induction at the Old Post Office building in Houston, one pace forward would have meant acceptance of the call-up to serve in Vietnam.


"Why should me and other so-called negroes go 10,000 miles, away from home here in America to drop bombs and bullets on other innocent, brown people who's never bothered us?"

Muhammad Ali refused the draft to go into Vietnam in 1967 and it cost him his World Heavyweight Champion  title, 5 years in prison and a $10,000 fine. He said that if the Vietnamese came over and attacked this country, he would be the first one to defend it.

So why is the journalist going on about sending National Servicemen to fight the war in the Middle East ("Get national servicemen to volunteer for overseas missions", TODAY, Tuesday 25 Nov)? Just because Tony Blair was a willing poodle for George Bush Jr, should our young men risk their lives for some politician's ego trip? The irony is that the United States had fought to introduce democracy to countries like Iraq - and some say they have failed miserably - when our own elected officials are adamant that "Western democracy" is not meant for us. Why then go to war?

Sure the generals would like some war stories to tell their grand children, and grassroots leaders - is that why the ex-general is now in Acheh? Patton loved to be called "old blood and guts", but the grunt slogging in the mud was right to point out: "Oh yeah, our blood, his guts". The writer must have missed his medication when he penned that "Singapore can be confident that national servicemen will step forward and volunteer to serve on the SAF's fourth journey to the Middle East."

The real battle worth fighting for is within our homeland. It's not just defending our jobs and livelihood from the foreigners brought onshore by the pro-alien party. It's also about taking back what rightfully belongs to us in the first place, starting with the balance in our Central Provident Fund.